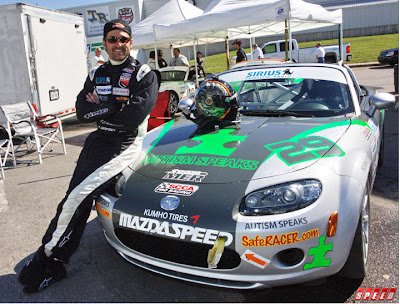 TROIS-RIVIÈRES, Que. (Aug. 19, 2007) - Starting on pole and leading all 29 laps, Jason Saini, of Fort Worth, Texas, not only won Round Seven of the SCCA Pro Racing SIRIUS Satellite Radio Mazda MX-5 Cup at the Grand Prix de Trois-Rivièrs, but also clinched the 2007 MX-5 Cup Championship. ......


In yet another autism awareness coup pulled off by Autism Speaks, Grey's Anatomy star Patrick Dempsey will be racing the Autism No. 9 car at the Grand Prix de Trois-Rivières Sunday in Round Seven of the SCCA Pro Racing SIRIUS Satellite Radio Mazda MX-5 Cup.

For Sunday’s 45-minute MX-5 Cup race, Dempsey will step behind the wheel of the No. 29 AutismSpeaks.org/Team MER MX-5. As a parent of three children, the mission of Autism awareness is easy for Dempsey to identify with.

“We’re seeing more cases of Autism being diagnosed and we don’t know where it’s coming from or why it’s happening, especially more in boys. I have two young sons and it’s certainly a concern of mine. I think for anyone who’s a parent and anyone who has to go through this, it’s a difficult thing, but there’s a lot of help out there now that wasn’t there before. The big thing is to be aware and watch your newborn, talk to your doctor and educate yourself about it. That’s why it’s great to be a part of Autism Speaks.”

“We’re really happy that Patrick has agreed to drive the Autism Speaks car,” Team MER representative Marc Miller said. “Ever since my son was diagnosed it’s been a passion of mine. Thankfully with the support of the team we can provide some exposure to the organization and what they’re doing and having Patrick driving the car is an added boost to the whole program.”