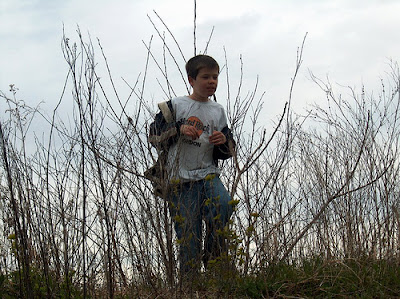 It is now 1 year, or more accurately, 1 year and 2 days, since I started the Facing Autism in New Brunswick (Canada not New Jersey) blog site. It has been an interesting year. I have kept this site as a moderated site and I am convinced that is the only way for an autism blog site to function. The divisions within the autism "community" are intense and there are several great autism divides. The dialogue while often informative, and occasionally enlightening, often descends into petty bickering between members of entrenched camps some of it offensive. It is necessary to keep some of the more extreme stuff off of this site.

For those who don't share my views, and I believe there are 1 or 2 of you out there, you have to blame a fellow named Charles LeBlanc for the existence of this blog site . Charles is a very controversial friend, who has in the past chipped in to help local autism causes and operates New Brunswick's most famous, or most notorious, blog site - Charles LeBlanc Political ADHD Activist. His writing is a bit on the wobbly side but he takes excellent photos. He criticizes a number of public officials, sometimes unfairly, but on his better days Charles will bring public attention to bear on important social issues like the plight of the homeless. He is, at the end of the day, a royal pain in the ......... neck for a lot of public decision makers which is why you have to blame Charles for this autism blog site. You see Charles told me that he regularly gets visitors from the government offices he criticizes. They may not like what he has to say, or how he says it, but they still visit his blog site daily to see what he is saying; a fact confirmed for me by other friends in the public service.

That is the lesson I learned from Charles and his web site and it has proven true with Facing Autism in New Brunswick. If public decision makers will read what you have to say about them publicly on a web site it makes sense to have a web site to advocate for your cause. Being in the public domain they take it more seriously because it is in the public domain that they earn their living.

When I blog about New Brunswick government institutions or politicians, it is common to get a number of visitors from the government site. If education is the issue then Statcounter will invariably show an uptake in visitors with a separate Department of Education signature. I also get "gc" (government of Canada) visitors when posting on federal government issues.

The most startling visit to my web site? I recently received a visit from someone using a Central Intelligence Agency account. Given the political and security mindset in the US since 2001 that sort of jumps out at you, even though it may just be a clerical worker with an autistic child, visiting your site.

My most enjoyable blogging moments have occurred when I found a reasonable, heck any, excuse to post pictures and comments about my son Conor. And the kind remarks that some have offered about my buddy Conor are definitely the highlight of my blogging year on Facing Autism in New Brunswick.

I thank everyone who has taken the time out of their day to visit this site during the past year.
Posted by Unknown at 9:53 am

However I would take issue with you on one thing, a very serious thing.

How can you have the gall to say that it's great to post pictures of Conor and then not post any!!

Thanks mecwen. Blogerversy. I like that. And thanks for you kind words about Conor.

Congratulations for your blog's first birthday! May there be many more.

I know don't if I've just been insulted or praise???

Thank you. I appreciate your visits to my site and your thoughtful, polite, comments.

I started out by praising you, a little bit, but thought I better add some insult to keep your ego from growing too much.

Thanks for the visit and trryyyyy to stay out of trouble will ya?

Keep on blogging Harold....this is a very informative site.

The year just zooooooomed by.