Illinois, Affordable Health Care For All, Except those with Autism.

I do not pretend to fully understand the complexities of the American political system let alone the mysteries of Illinois politics but I am genuinely perplexed by the actions of Illinois Governor Rod Blagojevich. The Governor, who purportedly is calling for more health care services for his state, exercised his line item veto power to cut hundreds of millions from the state budget including money for the Easter Seals programs of Peoria and Bloomington which provide health care services for 16,000 families. As reported by Central Illinois Proud.com these programs were told by the Illinois Senate and House they would receive $10,000,000 for services; an amount which the Easter Seals people did not consider adequate but which the Governor still cut in half. 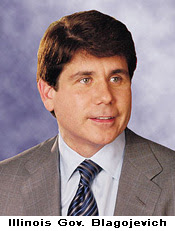 What was not cut from the budget? According to the Chicago Tribune:

* $15 million for salaries of Blagojevich, state lawmakers and other officeholders, which includes a 3.5 percent pay raise that comes on top of a 9.6 percent raise approved last week. The governor's salary now moves to $171,000.

The Tribune also points out that the projects of members of a key legislative committee with power over the governor's planned expansion of health care services were not cut:

Left intact were projects sought by Republican and Democratic members of the Joint Committee on Administrative Rules, a little-known legislative panel that could decide whether the governor gets to expand health care.

Many observers interpreted the move by the governor as a bid to buy votes from long-standing Senate Republican and House Democratic critics who sit on the panel.

I do not have knowledge of the intricacies of Illinois politics but the matter of health care services for autistic persons and their families does not seem to be high on the list of priorities of Illinois Governor, and Autism Zero, Rod Blagojevich.

UGH! I am so grateful I don't live there. I bet if he had a family member with autism he would be thinking differently.