Autism Researcher Dr. Michael Wigler - Who Is He? 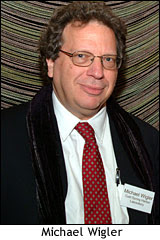 The world of autism research is being rocked on an almost daily basis as the Autism Knowledge Revolution has wrested control of the world discourse on autism away from personal biases and opinions and placed it back in the ambit of solid scientific research. Dr. Michael Wigler and the Cold Spring Harbor Laboratory have been at the forefront of this explosion of autism research with their development of the genetic mutations explanation of autism. But who is Dr. Michael Wigler? Newsday provides an introduction and details his impressive background in mathematics and cancer research.

" Michael Wigler, the geneticist leading Cold Spring Harbor Laboratory's search for the genetic basis of autism, is a celebrated scientist who has made significant contributions to the molecular understanding of cancer.

Observers say it is his rare ability to see mathematical patterns in the complexities of genes that allow him to produce new ways of understanding disorders that underlie human debilities.

Having conducted research at the lab for 30 years, Wigler was in the forefront of scientists who developed the tools to probe cancer's DNA. He's also co-discoverer of the first human oncogene, a molecule capable of transforming normal cells into malignant ones. His work at the lab also led to the development of ROMA - representational oligonucleotide microarray analysis - a highly sensitive technique that allows scientists to profile the genetic basis of cancer and other diseases.

"Michael grew up as a mathematician and began to indulge in genomics," which required a strong mathematical background, said Dr. Mary-Claire King, the world-renowned medical geneticist at the University of Washington. She led the research team that discovered the breast cancer gene, BRCA1 and collaborated with Wigler on his initial work focusing on spontaneous mutations in autism.