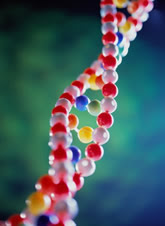 The last year has been filled with news of autism research breakthroughs coming at such a quickening pace that they are creating an Autism Knowledge Revolution. Much of the research has focussed on genetic contributions to autism with Professor Michael Wigler's spontaneous mutation theory commanding center stage. In Hunting the gene that traps children in their own world Times Online examines these breathtaking research developments in historical perspective and speculates on what we might expect in the next year as "gene chips" are applied to the databases of the Autism Genome Project:

The scientific success story of 2007 has been the coming of age of a new method of gene-hunting that can find the sort of genes with weak effects that are thought to influence autism. These genome-wide association studies compare the DNA of thousands of people who have a disease with healthy controls, using tools called “gene chips” to screen the entire human genome for hundreds of thousands of tiny genetic variations that differ between the two groups.

In recent months, the technique has revealed scores of genes that subtly influence common conditions such as diabetes, heart disease, breast cancer and multiple sclerosis, often raising the risk by as little as 10 per cent.

Autism is the next target. The Autism Genome Project (AGP), an international consortium that studies more than 1,000 families with at least two autistic members, is about to apply the tool to its database.

The TimesOnline article provides an excellent summary of the theory that autism actually consists of three separate developmental disorders which are most devestating when they all occur together:

What Professor Wigler’s theory does not account for is another aspect of new thinking about autism: that it may not be a single disorder, which if proven correct would certainly explain the spectrum element of autism disorders

For autism to be diagnosed, children must meet three criteria: they must show social impairment, communication difficulties and nonsocial problems such as repetitive and restricted behaviour. Yet there is an emerging consensus that these traits do not always go together and that there are people who meet the criteria for one or two characteristics but who do not receive any diagnosis. Autism, in short, may be the confluence of three separate developmental conditions. Only when they occur together is the result devastating.

Research by Angelica Ronald, Franc-esca Happé and Robert Plomin, of the Institute of Psychiatry, has suggested that each of these three problems is influenced by different sets of genes. The twin studies have shown that while each trait is highly heritable, they do not often overlap.

The multiple developmental disorders seems correct on an intuitive basis. It will be interesting to see if the studies provide evidence to support the theory.