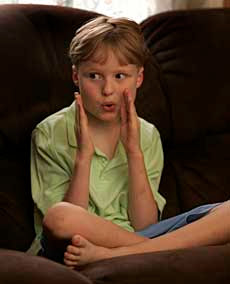 All autistic persons are not savants. There is a wide range of severity of autism. There are some who are intellectually impaired and some who can not communicate. But if you went by some mainstream media sources like CNN, Newsweek and the UK Guardian, by Hollywood movies or by internet sites devoted to autistics who choose to become non-speaking autistic adults, after years spent as a speaking person with a different diagnosis, you would know little of the realities of life for severely autistic persons and their families.

The realities of life for severely autistic children and their families were well and accurately portrayed in the Autism Every Day video and in the excellent Faces of Autism series in the Vancouver Sun. And the attached link and excerpts from The biggest frustration is you don't know in The Roanoke Times, Roanoke.com, August 13, 2007, also provides a realistic portrayal of life for, and with, a more severely autistic child. It is the story of Nicholas Crouch-Hullender a non-verbal 8 year old autistic boy.

A few months later, when Nicholas turned 2, he was officially diagnosed. Crouch-Hullender had an answer to her son's unusual behavior.

And that's when her questions really began. Would Nicholas ever talk? Could he ever live by himself? What teaching method or special diet would be best?

Years later, Crouch-Hullender is still wrestling with such questions about her son, who is now 8 and can say just two words, "hi" and "bye," though he can type his name and can use sign language to say "I love you" to his family.

Nicholas tends to pinch when he gets mad. A naturally fair-skinned redhead, Crouch-Hullender now frequents a tanning salon so that bruises from where her son has grabbed her won't show as much.

Crouch-Hullender said her son is "very intellectual" in some regards but still struggles with some tasks a kindergartner could do.

When Nicholas was 5, doctors told Crouch-Hullender her son could never get by on his own, but she holds out hope that he will inherit her house one day and be able to live at least somewhat independently.

That child can do a lot more than my son (who is 6 though). That's the case more often than not, so I have trouble relating to this supposedly horrible "reality of living with an autistic child" and sympathizing with those who claim that a child who is no worse off than my son is so much of a problem and so on and so forth.

You took a couple shots there at Amanda and Joel probably. How about Jim Sinclair? He speaks now, but didn't until he was 12.

I didn't mention any names. I am glad that Mr. Sinclair speaks now. Are you aware that there are many thousands of autistic persons who do have such positive changes as they mature?

And what does Ms Baggs have to do with autistic non-verbal children? It is my understanding that she did speak, attended high school, college at the age of 14, engaged in conversations with educators and psychiatrists etc before deciding as a matter of choice, as an adult, to refrain from use of speech.

You must ignore Amanda's background (or I prefer to think you do).

Like most classically autistic children, I understand Amanda was a late talker. She had a regression as a child as well. (I might be mixing up the details there).

She also had a regression in adulthood or late adolescense. This is probably rare, but it happened to her. I don't believe she can speak pretty much at all now, even if she made an effort to do it.

She wrote about herself here.

It must be pretty insulting to someone like Amanda or Joel to tell them that they don't speak because they "choose" not to. Joel, for example, can produce speech. The analogy he uses is that of a person who needs a wheelchair even though they can walk short distances. You don't think a person in that situation is just being lazy, do you?

Speech is a good thing to have. But what I think is of paramount importance is for autistic people to live a full and happy life, regardless of speech.

I would also suggest much caution when suggesting that a person has "chosen" not to speak (or any other attribute of disability).
There are children and adults who cannot speak, no matter how hard they try. There are others who have some speech, but it requires so much efforts that leaves them exhausted, or is so poorly understood or perceived by others that is rarely useful. I don't think we should blame these individuals if they "choose" not to speak.
Some non-verbal children probably are also able to (some) talking. My son was saying several words at 14-16 months. At about 18 months, he was saying them rarely and only when prompted by his cousin. So we all thought he was in some non-talking mood and when at about 20 months he stopped talking entirely, we didn't first realize the extent of the problem. It is likely that at some moment during his regression he was 100% unable to speak, but at the beginning he was just refusing to speak to adults.
As a young child, Conor also had a period when he "abstained" from talking although he had some ability. At the very day when you denied him the apple, he revealed this ability. However, you saw what effort was necessary for him to say a single short word.
So some autistic children can speak (to some degree) but don't because for them, it is difficult in ways we cannot even imagine. It is very likely that it is the same with some autistic adults.
Besides autistics, there are other people who can speak but have good reason to avoid it when possible. Some stop at a certain syllable and just repeat it (I don't know the English term for this speech defect, quite common among boys.) I had a fellow student, most likely with cerebral palsy, whose speech was very slow and poorly articulated. I also know a lady who can only whisper after thyroid surgery damaged her vocal nerves.
Last, let's not forget that our brain cells slowly die out as we get older and this affects the brain functions. Most people have excellent mechanical memory at 18-20 and mention some loss of this ability at 30-35. Speech in most people isn't affected until quite old age, but if a person has developed speech late in childhood and has always had difficulties with it, I guess he may become non-verbal relatively early in adulthood.

Joseph, are you kidding me, forget political correctness, but you sir obviously have a problem. If you can't see that an eight year old child that can not say one word spontaneously, can not toilet, and no ability to control his body a terrible thing, then you can not be human. The "reality of living with an autistic child" is that you have to face the fact this child will become an adult. We all look forward to our children becoming adults and being able to care for themselves as a basic need. Speaking is not an end all, but communication is vital for health and psychological well being. Any parent that faces lifelong care of a child sees that basic human longevity will affect the odds of ever "completing" our job, the job of weaning our child from our assistance for day to day tasks. I am qualified to weigh in on this child, as I am his father.

Joseph, are you kidding me, forget political correctness, but you sir obviously have a problem. If you can't see that an eight year old child that can not say one word spontaneously, can not toilet, and no ability to control his body a terrible thing, then you can not be human. The "reality of living with an autistic child" is that you have to face the fact this child will become an adult. We all look forward to our children becoming adults and being able to care for themselves as a basic need. Speaking is not an end all, but communication is vital for health and psychological well being. Any parent that faces lifelong care of a child sees that basic human longevity will affect the odds of ever "completing" our job, the job of weaning our child from our assistance for day to day tasks. I do have the right to weigh in on this child, as I am his father.