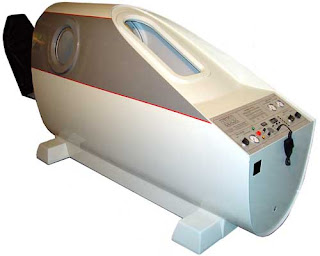 In Honolulu the Hyperbaric Medicine Center has been conducting a study on the effects of Hyerbaric Oxygen Treatment (HBOT) on children with autism. In the procedure, as reported by KHNL 8, children are placed in a chamber pressurized down to about 18 feet of seawater wearing a mask. They receive 100 percent oxygen at which level they are supposed to receive the healing properties of hyperbaric therapy. Alyshia Busby's daughter was a participant in the HBOT study. The family had tried a range of different treatments for their daughter's autism without seeing any results. With HBOT treatment, according to Ms Busby, there was immediate benefit to her daughter who showed more spontaneous language, attention and focus.

Conclusive evidence of HBOT efficacy in treating autism? No, far from it. But it is some evidence and it will be interesting to read the published results of the Hyerbaric Medicine Center's study.
Posted by Unknown at 5:51 am