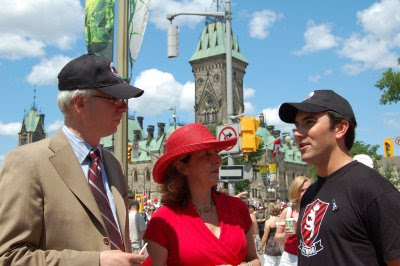 Jonathan Howard Runs the Dream across Canada to raise funds to support people with autism and raise autism awareness. He began in March in St. John's, Newfoundland and hit Fredericton, New Brunswick where I met him on June 5. I had the opportunity to talk with Jonathan at that time and I was very impressed. He is a sincere and dedicated young man of 24 who has committed the better part of a year of his life to help people with autism.

Jonathan has met, and raised autism awareness, with provincial premiers along the way. This week, as detailed in his hometown journal, The Mississauga News, Jonathan arrived at Ottawa where he was joined on his run by Kathleen Provost, executive director, Autism Society Canada, and Senator Jim Munson. Jonathan also met with federal Liberal Leader Stéphane Dion. Jonathan reports on his blog that he had extended an invitation to meet with Prime Minister Stephen Harper. Jonathan, very diplomatically, states:

For those wondering- What about the Prime Minister Stephen Harper? The invitation was sent a week ago and I am still awaiting a response. Lets Hope!

Far be it from me to challenge Jonathan in the Hope department. If anyone can get Mr. Harper to wake up to the realities of autism in Canada it just might be him.

Keep up the good work Jonathan!

autism
Posted by Unknown at 6:55 am