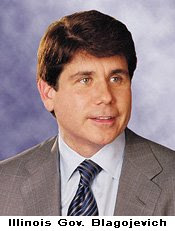 In an August 2007 comment I had referred to llinois Governor Rod Blagojevich as an autism zero. Because of his recent actions I now have to retreat from that description. Perhaps I did not understand the complexities of Illinois politics in the first place, which I admit is probably the case, but regardless, Governor Blagojevich has gone from autism zero to autism hero.

As described in Illinois Leading the Fight Against Autism on Health News:

The state's governor, Rod Blagojevich, used his amendatory veto ability to add autism coverage language from Senate Bill 1900 to House Bill 4255, a bill that required public employee health plans to cover preventative physical therapy treatment for multiple sclerosis patients. The new bill would be expanded to require insurers to cover autism diagnosis, psychiatric and psychological services, and to include occupational, behavioral, physical and speech therapy. Insurers would also be required to pay up to $36,000 a year per patient and to provide an unlimited number of medical visits for autism patients until the age of 21. Senate Bill 1900 was defeated earlier this year, despite broad bi-partisan support.

Hopefully Bill 4255 will become law, to the benefit of autistic children in Illinois. It could also stand as an example to other jurisdictions and politicians, including Canada and Prime Minister Stephen Harper, of how to address autism seriously.

autism
Posted by Unknown at 7:22 am

Back to zero now that the Bill was defeated for the fourth time this week.