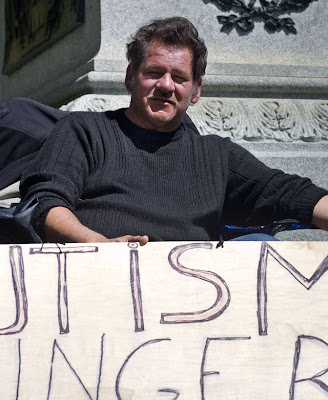 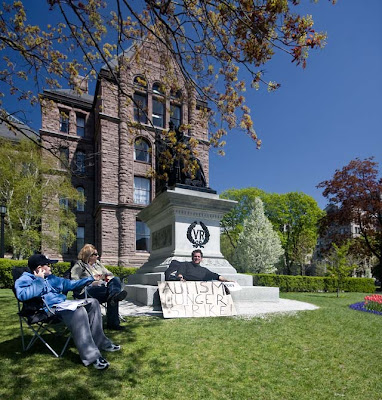 Torontoist Photos, May 10 2008
Today is May 11, 2008 and Stefan Marinoiu is continuing the Autism Hunger Strike that he began on May 5 outside Queen's Park in Toronto. If the decision was mine to make I would end Stefan's hunger strike now. With his existing diabetes condition Stefan's health is at serious risk. But the decision is not mine to make. The decision is Stefan's and he showed during his 11 day Autism Winter Trek that he is a very gutsy and determined individual. I spoke with Stefan very briefly by cell phone yesterday. I expressed my admiration for what he is doing but I also asked him if he would consider setting an end date for his hunger strike. Stefan answered that he would end his strike when something is done to help autistic people.

Stefan has a 15 year old son who is autistic and who received no autism specific treatment or education services. Stefan wants to help his son and others with autism. A Friday May 9 video update can be viewed on the Hungerstrike For Autism Now Facebook group. In the video Stefan outlines 3 goals he wishes to accomplish for autsm:

1) Get rid of the waiting lists for autism treatment in Ontario by November;

2) Have ABA by professionally trained people in the schools by September 2008;

3) A federal commitment to national guidelines and financing for autism treatment and an autism agency within the federal health care system.

These are not impossible goals. As Jean Lewis of FEAT-BC and Medicare for Autism NOW! said about amending Canada's national Health Care Act to include autism treatment - all it takes is political will.

The first two goals on Stefan's list have been implemented, or begun to be implemented already in New Brunswick. Training is critical. New Brunswick has been training autism support workers, clinical supervisors, teacher assistants and resource teachers for several years at the University of New Brunswick College of Extended Learning Autism Intervention Training program. Preschool autism treatment is provided through authorized agencies monitored by government. Trained teacher assistants have begun providing ABA in New Brunswick schools. My son Conor has been receiving ABA based instruction by a UNB-CEL Autism trained TA with plans and supervision by resource teachers and mentors trained at UNB-CEL for the past 4 years. If New Brunswick can make substantial progress towards helping autistic children why can't Ontario?

The drive for a National Autism Strategy has also been underway for several years. Two members' motions have received substantial support from Members of Parliament. But a commitment by a governing party is required to get Canada to face up to its responsibilities toward autistic people and provide financing to the provinces for autism treatment. The Conservative government of Stephen Harper will never make that step. That is clear from everything ever written by Harper and it will not change. The NDP has provided great support in the person of MP Peter Stoffer and others but have never come close to taking power federally in Canada. Only the Liberal Party can form the government and despite the very considerable support of Liberal MP's and Liberal Senator Jim Munson the Liberal Party has still not committed to implementing amendments to include autism treatment in Canada's national health care legislation.

Hopefully political leaders in Ontario, Ottawa and elsewhere in Canada will find the will to help autistic children and adults in Canada. If they are not sure what "willpower" looks like they might watch Stefan Marinoiu outside Queen's Park in Toronto.

In the meantime I hope Stefan takes care of himself and those who are with him help him keep a close eye on his health.

autism
Posted by Unknown at 7:00 am

WOW! theres alot of people in Canada that ave Autism! but thats just Canada theres the United States too and alot more!