Another Open Autism Letter to the Honourable Stéphane Dion 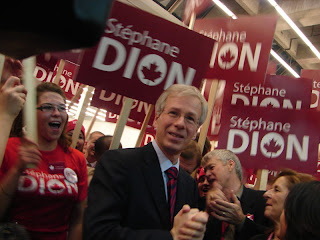 It has now been almost one full year since I emailed you asking whether a Liberal government led by Stéphane Dion would act promptly to include autism treatment in Canada's national health care scheme. To my great disappointment I received no reply. In almost 10 years of autism advocacy in New Brunswick and Canada you are the only politician or public decision maker who has not replied at all. I assume the fault lies with me, perhaps that I failed to observe some protocol with which I am unfamiliar, in posing my question to you. I apologize for whatever shortcoming I may have exhibited and ask you again, with respect, will a Liberal government led by you act promptly to include autism treatment in medicare?
In the year since I first posed this question thousands of autistic children across Canada have gone without effective evidence based treatment for their autistic conditions. Thousands have languished on waiting lists for treatment even in Ontario with all its many resources. Politicians can no longer credibly claim that there are many opinions about effective treatments. There have been several responsible reviews of the professional literature and studies of the effectiveness of various autism treatments. The most recent such review was by the American Academy of Pediatrics, Management of Children with Autism Spectrum Disorders, (Nov 1, 2007) which stated that:
The effectiveness of ABA-based intervention in ASDs has been well documented through 5 decades of research by using single-subject methodology21,25,27,28 and in controlled studies of comprehensive early intensive behavioral intervention programs in university and community settings.29–40 Children who receive early intensive behavioral treatment have been shown to make substantial, sustained gains in IQ, language, academic performance, and adaptive behavior as well as some measures of social behavior, and their outcomes have been significantly better than those of children in control groups.31–40
In the year since I first posed this question a frustrated father of a 15 year old autistic son, Stefan Marinoiu, of Toronto, has twice put his life on the line to draw attention to the need for treatment for all Canadians with autism. Children like his son Simon are literally going without the proven treatment that could help so many. Stefan walked for 11 days in mid-winter cold and blizzards to meet with Health Minister Tony Clement. More recently Stefan endured a 2 week hunger strike outside the Ontario legislature to impress again upon political leaders the need to take action to help autistic people in Canada. Federal financing could eliminate waiting lists for autism treatment in this country. That is a big part of the message Stefan Marinoiu has delivered in cold and hunger.
The Liberal Party of Canada could well form the next government of this great country. I ask you again sir, and with great respect, will you as Prime Minister act to include autism treatment in medicare to help the 1 in 150 Canadians and their family members who are struggling with the realities of autism disorders?
Parents across Canada have made their positions known asking, advocating, begging if necessary, to get their autistic children the treatment they need. Stefan Marinoiu has made his position known. He has twice risked his life to make it known that Canadians must act on behalf of autistic Canadians. Will you, the Honorable Stephane Dion, please make your position known?
Respectfully,