Autism Awareness: Run the Dream in Fredericton on June 5, 2008 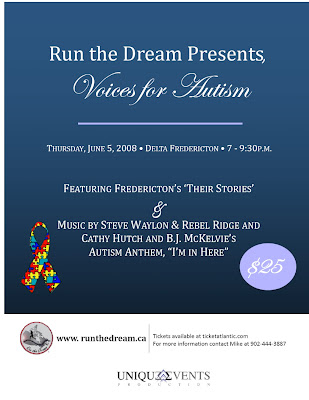 Jonathon Howard will soon be in Fredericton.

Jonathon is raising awareness of autism across Canada, and raising funds for children's charities supporting autism, by running across the country, beginning on March 25 when he dipped his toe in the waters at St. John's Newfoundland. On June 5, 2008 from 7 to 9:30 he will be at the Delta Fredericton for an event which will feature "Their Stories", online video interviews of family members, caregivers, and persons with Autism Spectrum Disorders who share their personal stories of living with autism.

Keynote speakers will include Brian Rimpilainen of Fredericton. Brian is the Autism Society New Brunswick representative with the Autism Society Canada and he has worked tirelessly toward development of a National Autism Strategy and inclusion of Autism in Medicare. He will be running with Jonathon from Oromocto to Fredericton on June 2. The evening at the Delta Fredericton will be filled with music by Steve Waylon and Rebel Ridge, Cathy Hutch and BJ McKelvie. Cathy and BJ will be performing their autism song "I'm In Here".

In New Brunswick we have accomplished much with hope - and with hard, focused, work. Our focus has been on ensuring that autistic children in New Brunswick receive evidence based interventions and education both preschool and during the school years. Much has been accomplished although much remains to be done. Adult care for persons with autism in New Brunswick is abysmal and requires a massive overhaul. Efforts to provide decent residential care for autistic adults in New Brunswick will be successful only with hard, focused, work and determination. And with hope. Jonathon Howard's Run the Dream spreads the message of hope for persons with autism and those who love and care for them and hope is invaluable in fueling our efforts to make gains for autistic persons as preschoolers, students and adults.

Although I was aware of Jonathon Howard's Run the Dream since he began in late March the impact of what he was doing to raise autism awareness in Canada did not hit me until I spoke at the Medicare for Autism NOW! event in Oakville, Ontario on April 19. I had the privilege of meeting Norah Whitney, president of FEAT Ontario and her son Luke. Luke is a very smart young man and I enjoyed talking with him. One of the first things Luke said to me was to ask if I knew Jonathon Howard. At the time I couldn't say that I did, although I knew about Run the Dream. After June 5 I should be able to give Luke a different answer.

I urge everyone who can to attend the Run the Dream evening at the Delta Fredericton on June 5. Tickets are available at ticketatlantic.com. For more info contact Mike at 902‐444‐3887. Admission is $25 and will go towards children's charities that support autism.

It should be a lot of fun and a good evening for autism.

autism
Posted by Unknown at 4:27 am

I thought I lost your blog for awhile there. Lightning struck a pine tree in front of my house and knocked out everything, including my PC.
I could have sworn it was on a surge protector, but I had given it to my daughter, telling her that I'd get me another. Procrastination has always been my downfall. haha!

Anyway, I searched about the net, just like I did at first and finally I found it/you.

I shall RSS feed you again.:-)