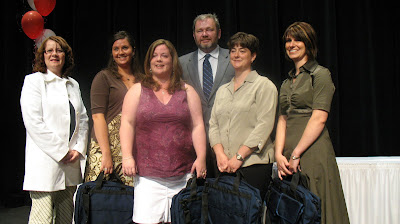 
Yesterday I attended the graduation ceremonies for several groups of students who were graduating from programs offered by the University of New Brunswick College of Extended Learning, including graduates of the Autism Intervention Training program. I had the privilege of addressing the graduates of the AIT program and others present and, with ASNB President Lila Barry, of handing out awards of excellence. It was both an uplifting, and a humbling, experience to be able to participate in this important event for people who contribute so much to bettering the lives of autistic children in New Brunswick. I commented yesterday on the quality and integrity of the UNB CEL Autism Intervention Training Program. It is a program that has helped put New Brunswick ahead of many other state and provincial jurisdictions in North America when it comes to actually helping children with autism.

The graduates themselves though deserve the ultimate praise, appreciation and respect. As a parent I did not choose to become involved with autism. Autism chose my son, and in doing so, chose me. For the fine people who graduated yesterday from the UNB CEL AIT program though it is a different story. They chose to be involved. They chose a career helping children with autism - including my son, Conor.

To the graduates of the UNB CEL Autism Intervention Training Program I say again THANK YOU.
Posted by Unknown at 6:24 am