Autism Reality: Autism Is A Disorder 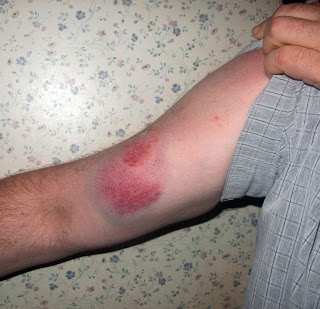 Bruise from injury suffered trying to prevent my son from injuring himself
There are few mainstream media outlets that provide reality based accounts of autism.  Feel good stories and Rain Main stereotypes abound.  I have tried to present a reality based picture of autism disorders including emphasizing the fact that Autistic Disorder and the other PDD's now referred to as Autism Spectrum Disorder are exactly that ... disorders. I was pleased to be interviewed recently as part of a brief article by the National Post which tried to at least dispel some of the myths about autism a disorder which interferes with the everyday life of those who suffer from it.

Autism is a disorder which impairs daily functioning abilities of autistic persons. If a person does not suffer any substantial impairment or limitation in their daily functioning abilities they should not be referred to as autistic, they should not call themselves "auties" or "autistics" and they should not misrepresent themselves to the world as being entitled to speak on behalf of persons with autism disorders, particularly those with severe autistic disorder.  Parents of autistic children face enough challenges without having to deal with myths generated by those who have no real knowledge of what it means to be severely autistic.
In   Wellbeing: Tuning in to the realities of autism  Melissa Leong  and the National Post interview Suzanne Lanthier of Autism Speaks Canada about some of the myths generated about  autism disorders and the Rain Man stereotype which still dominate mainstream media autism accounts. It would take a series of lengthy, in depth analysis to cover all autism myths adequately. This short article only highlights briefly some of the myths but it does attempt to speak to some of  the realities of autism disorders.   Ms Leong interviewed me for the article and includes my  brief account of my son's  mid January, middle of the night, meltdown where he bit me on the bicep while I tried to grab his arm to prevent himself from hitting himself in the face and head.
My son Conor is a smiling, happy boy who is a lot of fun to be with ...  in him I find great joy  .... but not in his autistic disorder .... not in the disorder which limits his life, and occasionally causes him to injure himself and, even more rarely, those who love him.

Autism is a disorder and its harsher realities are not pretty.
Posted by Unknown at 4:05 am

They gave you a small paragraph in Mon's article.... did you see yesterday's??? I'd wait until the end of the week before I 'patted' them on the back for a well written series.

Right now... I am not convinced.

Your Conner is a delightful looking child. I worked for 7 months at a residential "school" for kids with MD and Autism to such a degree that they were unable to live at home or be schooled in their regular school district. Their parents/schools were just unable to handle them, so this private school took care of them for a grand cost of $80,000 a year.

Staff were intensively trained in ABA. I was really bad at it, and left. This, and my student teaching 30 years ago are my only encounters with children who were on the more severe part of the spectrum. My son is Aspergerian-like, and although making it through school was exceedingly difficult, the day to day at home is not. In the old days, he would have been referred to as a "smart-ass". This is troubling, but hopefully not totally disabling.

I was reading recently where studies of autism tend to include the less severe subjects because they are more amenable to treatment. This is cowardly. It's like a teacher refusing all but gifted students in his/her class.

I am sorry you have to suffer. And I think Conner probably suffers from the hurt he causes you, too, but can't go beyond it. He must protect himself as he sees fit. I say this not because I know Conner, but because of things I've deemed from my son...talks we've had. You know there are similarities that can't be discounted. But a person who has an autistic way of thinking is NOT the same as a person who deals with profound manifestations of autism, any more than a person of regular IQ is the same as a person of profound Mental Disabilities.

I agree FW2. I am not suggesting the entire National Post series is good. I was just happy to see 1 single article in a major newspaper that attempted to dispel any myths. Heck i was pleased that they stated flat out that autism is a disorder.

r.b. I agree with your comments. I do not believe for a second that Conor was trying to cause me any harm. He was in extreme frustration/meltdown mode and that is all. He is my buddy ... forever.

In our son's experience, as he is becoming more verbal now, when ever he exhibits "physical behaviors" he will come back and apologize. Such events are very very rare now. We know a few teens on the spectrum and they are verbal enough to explain though they are not "high functioning" per se. All of them have said they "react before I think" and have "no control, and do not know why, when very upset". For each kid the trigger is different. It appears to me that (in plain terms) they (and my son) physically manifest emotion for the lack of being able to articulate. I do not see this as what some refer to as lashing out; I think it is the core of the disorder where the verbal, behavioural, and social deficits all intersect. Every ASD teen that I have spoken with feels the same – there is never any intent to harm, the disorder effects control. I have seen a few of the major meltdowns of these teens and I can guarantee they are not using their disorder as an excuse. Though your article portion may be small it is very good to see the disorder acknowledged as what it really is.

Hi! I'm sorry, I have a question: "If a person does not suffer any substantial impairment or limitation in their daily functioning abilities they should not be referred to as autistic," then how should one refer to them?

I would like to state for the record that the title of this post is absolutely correct. Autism IS a disorder, which what the 'D' stands for in ASD. Autism is also a handicap. I may even say that it is an abnormality. Do we really disagree on that much?

Also, I'm all for challenging stereotypes, or at least creating new ones, so that we are not all 'typecast' as Raymond Babbitt. I have met many other autistic people, but to the best of my knowledge, I have not met any autistic savants. Have you met anyone who is? They seem to be more the exception than the rule.

Not sure if you have come across this ND mommy blogger who is out there bashing you and this post. I see one of her commenters is Casdok. That should sum up the cluelessness right there.

Casdok fights just as hard for C as you do for Conor.

Why stir up the pot?

r.b. can you point to what I did to stir up the pot?

I'm sorry...I was referring to the anonymous comment above. Making it personal and about people and not ideas.

I appreciate your asking. I wouldn't want to be misunderstood.

I admire both of you, and I'd hope not to be caught in the cross-fire.