Autism and Wandering: It's A Matter of Life and Death 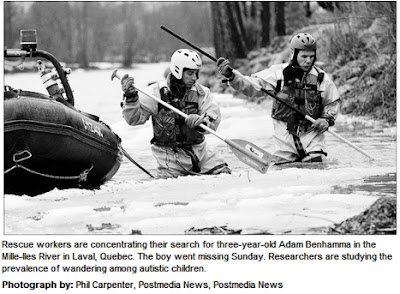 The Vancouver Sun is one of the very few media outlets that has presented an honest, reality based picture of autism disorders  to the public.  The series Faces of Autism remains one of the most comprehensive, honest portrayals of autism ever presented by mainstream media.  It comes as no surprise then that the Vancouver Sun has highlighted the important autism issue of wandering autistic children for exactly what it is ... a life and death issue.
In Search for missing boy highlights autism issue Autistic children are prone to wandering, forcing parents to take drastic measures to protect them the Vancouver Sun presents a Mike Appleyard/Postmedia News report on Adam Benhamma, the young, mute, autistic boy from the Laval area near Montreal who has been missing for several days near icy waters. The article tells of the tendency of autistic children to wander, of the efforts parents must make to protect their autistic children from wandering and the impact it has on them, and reports on the IAN, Interactive Autism Network,  announcement of a national survey to study the prevalence of wandering among individuals with autism.

Veronica Fraser, mother of James DeLorey,  the young autistic boy from Nova Scotia who was lost in a snow storm and died in hospital shortly after being found provides insight from her son's tragedy. Wendy Fournier of the National Autism Association comments on the IAN study and on her own personal experience with her wandering autistic child:


"We have parents who literally sleep outside their child's door because they're afraid their kids are going to get out of the house. It's a huge, terrifying problem," she said.


Fournier noted that her daughter Aly is autistic, and said she has experienced the fear of losing her child -something that is common among parents of autistic children.


"One day I was sitting on the couch, drinking coffee. All of our doors are completely locked -there's no way she can get out of the house. And my doorbell rings. It's my neighbour telling me that my daughter is next door trying to get into the swimming pool. And I have no idea that she was even out of the house.""

I have remarked on several occasions on this blog site about my personal experience with wandering, of the day when my son Conor slipped out of the house while I was on the phone discussing a business matter.  Thanks to good luck, a Good Samaritan who removed Conor from traffic on a busy street and him to a safe location, and our local 911 service Conor, and I, were very fortunate, we came out on the happy side of  the life and death reality of wandering autistic children.

Adam Benhamma and his family are living with that life and death reality right now.

I hope that Adam, despite the grim situation, is found safe and sound.
Posted by Unknown at 4:26 am

Thanks so much for doing a post about this very important issue. (I posted a story on my blog about this yesterday.) It has happened not far from where I live. My son, 5, has PDD-NOS.

Autistic children wandering is very real and can turn tragic easily. They did update the story in the Ottawa Citizen this morning to say that Adam is not deaf and mute but hearing impaired and speech delayed. Sadly, search and rescue have turned their efforts to the river. Poor little guy, this really breaks my heart.

I hope he is found alive. That poor family :(. It can happen so very quickly. I took my eyes off Jacob for less than ten seconds in the supermarket today. That was enough time for him to race to the fire exit doors and try to open them. Given that he was also very close to the main supermarket doors, the carpark and a very busy road, I was bloody lucky.