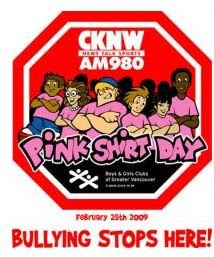 It is the essence of hatred and discrimination against anyone who is different or vulnerable, including people who are different because of their racial or ethnic background, sexual orientation or people with mental illnesses or neurological disorders.

Children with autism disorders are subject to bullying even by public figures seeking to promote their tired careers as shock jocks and comics.
On February 25, 2009 Facing Autism in New Brunswick will wear pink.

On February 25, 2009 I will wear pink to stand up against bullying.

Thank you for this.

I have participated in anti-bullying days at different schools. The students really get involved. The pink shirts let them experience what it feels like to be on the bullied side. I tell the students--especially the boys--that the Anti-Bullying Pink Shirt Day will be really successful if they can be comfortable wearing those same pink shirts on any other day without being bullied by others.

I wish your son well. Let him decide if he wants to wear pink that day. It's easy for adults to participate; it's much harder for young boys to do the same. The boys may change their minds if they see others partipating.

You don't have a pink shirt. What can you do?

Go to Zellers or, dare I say it, Walmart and buy some small boxes of pink dye. Find a plastic tub or cooler and place hot water in it. Add the dye and mix very well. Remember to wear old clothes while mixing. Add shirts and mix. One box of dye is good for about three to six shirts. Hang to dry. You may need to rinse shirts to get the excess dye off. If you do not have pink dye, wash your white shirt in hot water with a large red shirt or towel. Your white shirt will turn pink.

If anyone has a link to the inspirational story about the group of teens, who were "popular"-types and showed amazing citizenship and leadership in spear-heading a pink shirt campaign in their own school? It was within the last 2 or 3 years, and it may have happened somewhere in the Maritimes.

I'd love post this link EVERYWHERE if anyone has it...