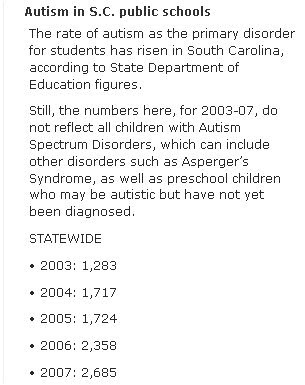 Source: S.C. State Department of Education, as Reported on The State
There are some who scoff at the notion that there is an actual autism epidemic. They ridicule the idea that the startling rise in autism diagnoses can be attributed to any real environmental cause. For those who refuse to see the autism elephant in the room the rise in autism diagnoses is attributable entirely to the expansion in the 1994 edition of the Diagnostic and Statistical Manual of the American Psychiatric Association, the DSM-IV, of the autism spectrum diagnoses from autistic disorder or classic autism to include Aspergers Disorder. But even that explanation does not explain the dramatic increase in the numbers in the last five years in South Carolina.

In South Carolina, as reported in Rising autism rates challenge schools on the State web site, the numbers of autism students counted by public schools has doubled since .... 2003 ... a period which begins 9 years AFTER the DSM-IV autism definition expansion. Even more troubling for the simplistic change in definition explanation for dramatic increases in autism in South Carolina is the fact that the doubling in autism cases counted in the public schools refers to a doubling of the classic autistic disorder diagnoses. It does not include Aspergers Disorders:
The number of students diagnosed with autism in South Carolina’s public schools has more than doubled in the past five years, creating more challenges in programming and staffing for education officials.

The state Department of Education counted 2,685 students in 2007, up from 1,283 students in 2003, with autism as their leading disorder. Official data for 2008 was not completed by mid-December, when school districts are required to update their totals .....

[Craig Stoxen, President,S.C.Autism Society], added that the state’s totals still are far less than the number of actual students with autism, or autism-related conditions. Because the state only counts the primary disorder, and because autism is just one of several disorders classified as an “autism spectrum disorder,” the level of incidence among students is underestimated, Stoxen said.
While some argue that there is no autism epidemic Education officials in South Carolina do not enjoy the luxury of hiding behind such an assumption. They are busy trying to provide the necessary supports to enable South Carolina students with autism disorders with real educations. In South Carolina schools autism is rising. Autism reality can not be ignored.

How they can keep saying that Autism is not an epidemic, is beyond me. It's more prevalent then any other disability and it keep rising.

What else has to happen?

They argue that the definition of autism was expanded from classic autism to include Aspergers in the 1993-4 DSM revisions thus increasing the total no of autism diagnoses, which is obviously true.

But that does not really explain the increasing numbers since 1994. In the SC story the school numbers show that the numbers of classic autism alone more than doubled since 2003 which is not explained in any way by the 1994 DSM revision.

As I live in SC I feel obligated to comment...

To be honest, I've seen many students with the "autism" diagnosis (classic autism) who don't appear to be autistic. They are very high functioning, but still carry the label because, technically, they meet the criteria.

I've also seen many students with the "autism" diagnosis who do not have autism but receive the diagnosis because of benefits and because "autism" is a new trend. I see students at age six with the diagnosis of "autistic disorder" and they are nothing like those with severe autism. They are so high-functioning they are almost normal, yet they are still technically autistic and so keep the label. (The ones I see at Mental Health Centers).

This also happens whenever I have to be around other "autistic" people. I'm always the only one with a severe version of the disorder, so much so I can hardly believe that the other 18-22 year olds are even "autistic" at all.

And these students are still very young. Since autism is now a household name every parent is on the lookout for it. So, as the children age, most of them will probably become high functioning and receive a new label.

But I'm only basing this on my personal experience and observations.

There's also the fact that diagnoses of cognitive disability have fallen with the rise of those of autistic disorder, indicating at least some diagnostic substitution. Then there's the fact that this is just South Carolina, after all. A rise in the number of autistic kids there might just mean that some have moved around.

It seems to me that there might be some rise due to environmental causes (even if it's entirely genetic, there are a whole bunch of environmental things that can even affect your genes) but not enough to call it an epidemic. And not any one specific environmental factor, or we would have noticed by now. Imagine how much more intense the 'mercury militia's reaction would be if the data actually supported their claims rather than just failing to completely disprove them.

Not that that has anything to do with the fact that the school system has to deal with the newly diagnosed kids, of course. Explaining a rise in autism diagnoses doesn't magic it away.