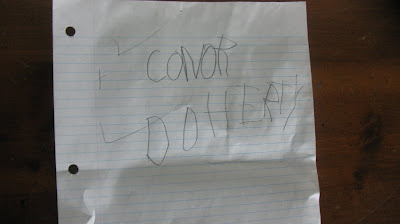 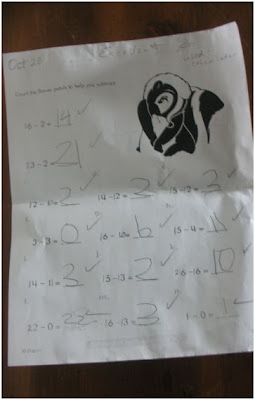 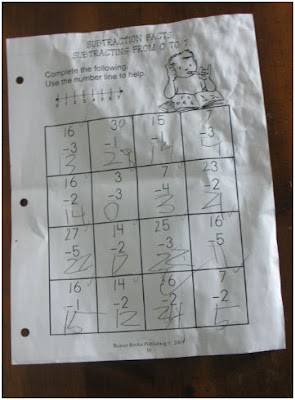 There are some who forget that "autism" as that term is now used refers to a spectrum of disorders that reflect deficits in social, communication, behavioral ... and intellectual skills. Not everyone with an autism spectrum disorder will attend Simon's Rock College for gifted youth, collaborate with neuroscientists or appear on CNN and CBC to promote an agenda for all "autistics". But success is relative.
Conor has autistic disorder assessed with profound developmental delays. He did not receive 40 hours per week of ABA from ages 2 to 5. He has received ABA intervention in school for the past 4 years and he has an excellent aide trained at the UNB-CEL Autism Intervention Training program. Unlike some who appear in the media regularly and bash ABA Conor has actual first hand exposure to ABA. Conor enjoys ABA intervention, looks forward to school where he receives ABA and to visits from his therapist. And Conor has learned a great deal via ABA methods.
The pictures above are pages from Conor's school work that came home recently in his lunch bag. As you can see he has been doing a lot of work on subtraction. Today he is scheduled to be in the school kitchen making nachos.
We appreciate all of Conor's support at Nashwaaksis Middle School, especially his excellent aide and resource and methods team, and from School District 18.

We commend the government of New Brunswick which is making our small province one of the best places in North America for an autistic child to attend school.

Most of all we are proud of Conor and the progress he has made. Conor is happy when he attends school and for that we are very, very happy.

"There are some who forget that "autism" as that term is now used refers to a spectrum of disorders that reflect deficits in social, communication, behavioral ... and intellectual skills"
Is that everything on the autistic spectrum? And surely it depends on how you define intelligence? I would say that my older son is more intelligent in many non verbal ways than I was at the age of 5.5 and yet he is a lot more severe in many ways with his autism than I am with my Aspergers.
Glad that Conor is doing well with his maths. Tom loves numbers and counting and has an abacus at home to help him.

I agree - ABA can be so beneficial for many with autism. My son Nigel had it for three years, and I know it was an integral part of why he functions as well as he does today. I'm glad that it is also beneficial for Conor.

Great work by Conor - you, mom, and him, deserve to be proud!

Our son is now going to JK in Ontario and schools here must use "ABA methods" for ASD children. Though not a strict intensive regime the methods do support him quite well and one full term now with zero behavior issues, zero peer problems, and more positives than can be listed.

Our son is still behind the curve intellectually but the use of ABA methods has made school very enjoyable for him. Our son can not wait to get on the bus each morning and comes home happy every day - usually with a new song.

An odd thing - the teacher specifically noted that the ABA methods are VERY HELPFUL to ALL the other students.

The ABA methods have not altered his character in any way nor diminished him in any way. They have been an effective way to deliver education (from school to life skills). When he has had enough work for the day he will tell us and we respect that - after which we play (and sneak in a bit of teaching). The entire time he is a happy laughing child. I again have to wonder where the antiABA crowd gets their world view. Do they not understand that the methods have evolved over time and that the use of any form of adversive or punishment does not have any support in any research and competent providers "tool kit"?

I'm very happy for you and him too. We're also very grateful for the professional aides, teachers and therapists who have helped my boys no end with the dedication and vocation.
Best wishes

Excellent that Conor is geting the support he needs (and some others too), but it is a continuous struggle to make sure the understanding (and services) are in place, both in edeucation and society. The real challenge is in the high school years, when it seems the availability of programs and services (and people) dwindle significantly. The biggest gap is for youth with ASD, and other comorbid diagnosis.

Know that there are others with children a few years older than Conor continuously trying to navigate the very difficult bureaucracies, for the continued progress of their children. Thankfully there are still some good people working on the front lines, and if you can find the good ones, there is hope.

Signed: a mother working at the "bleeding edge" of the system, and hopefully these efforts are bringing some light and understanding for all families living with ASD in New Brunswick. There really should be a guidebook, because the hurdles are more than many families could attempt to navigate.

The ABA that is used in school's is for dealing with challenging behaviours only.

ABA that is done by an accreditted program in Ontario, Ie, one from a Children's hospital not one from a private agency... is 6 or so hours per day/5 days per week (and you're to do it after they leave and on weekends) of unending rote learning, sitting at a table, unable to do anything differently until they master JUST THAT TASK. Like drawing a line. It had to be absolutely perfect, before we could move on to a slanted line etc.

Then the child is handed a toy for 10sec or so they would mand for it again. That was considered to be conversation.

This is TRUE ABA. Most private agencies call it ABA so that you as a parent get funding. But the reality is their programs are a lot more fluid, variable and are not true ABA. They use play, music, floortime and ABA. This is a lot more relaxed and more enjoyable for a child.

True ABA is cruel. My son's psychometric report just before they were kicked out says "child is at an 18mth dev level (this was at 4.5yrs of age) and cannot transfer skills outside of the ABA setting". When asked about the "skills transfer" part... "We don't have a program for that" was the reply. The 18mths developed part.. I just ignored.

They (ABA - part of the kicked out agreement was him being in the transfer to school program - school kicked them out after 6 weeks) decided once he was in SK that he should sit during carpet time with a book to keep him quiet. He wasn't to learn from the teacher. The teacher took it away before the end of the first week, PDD made up behaviour PEC's for the carpet (Shhh and legs crossed - all children used them) and they started working on it. He does amazing at carpet time, and being "student of the day". They set it up for his minimal speech skills... and he takes his turn.

This is Ont's PPM on ABA, FYI. http://www.edu.gov.on.ca/extra/eng/ppm/140.pdf it's not true ABA. Trust me, I threw a hissy when it came out... the PDD teacher (goes school to school) and I had a LONG discussion on the subject... the school knows I'd NEVER agree to true ABA.

Also, my son in Gr 2 is fully integrated - EA, Teacher, regular class, PDD comes in every couple of weeks, OT and SLP - You don't need ABA.. you need to teach. My son is 7, severely autistic, and has mastered those math skills shown on this blog already, he also reads/spells at grade appropriate. Language and verbal skills are significantly delayed.... but his teacher just views that as a challenge to overcome... not a reason to label him as mentally retarded.

Under Ont's PPM 140.. this is considered to be ABA... and it is... reinforcement to teach appropriate behaviour/social skills in the classroom.

This is not my problem with ABA.. this I have fought for for YEARS.

My complaint was that never ending, rote learning, sitting at a table crap.

It is unfortunate if your child was not involved with a good ABA program or therapist.

What you describe is not what is taking place in New Brunswick.

"True ABA: is not cruel. It also involves managing behavior, teaching communication and other skills.