Conor and the Clock 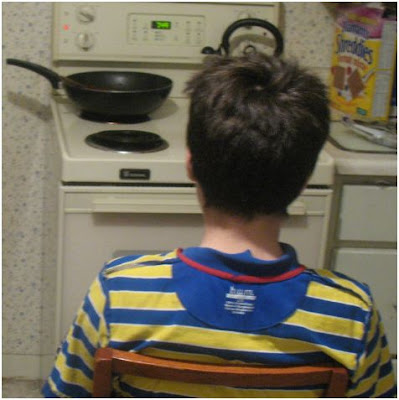 I mentioned in an earlier post, Conor's Sense of Humor - Eight Zero Zero and Zero Kisses, that Conor now is used to going to bed at eight pm or eight zero zero as he likes to say. He pulls up a chair, sits and watches the clock inch toward 8:00 every night. In this picture it is approximately 7:47 and Conor is focused intently on the clock. It is important to keep him busy between 6 and 7:45 to make sure he does not sit there for two hours waiting.
Tonight we went for an after supper walk. The rain had stopped and Conor and Dad headed out. Conor decided he wanted a "bridge walk" a hefty walk of about two hours at a brisk pace. We made it about 40 minutes when the rain started again so we ducked into a Jean Coutu pharmacy and called a taxi to get home. Conor had a heavy chest cold this weekend and I did not want him getting soaked.
While in the pharmacy waiting for the taxi, Conor managed to convince Dad of the need for a "Conor treat", in this case a Coffee Crisp chocolate bar. The taxi arrived shortly afterwards and we headed home where Conor, after some home diversions, took up his place at the clock to wait for bed time - eight zero zero.

Tom loves numbers and clocks as well, but not focused on a particular time. When he gets upset in town we take him into a shop that has a countdown clock on it which helps him sometimes. I prefer palindromic times, eg 11.11 and will wait for those, but not excessively so. If I miss them I hate it and then consider changing the time just to see the time, but that would be caeating so I don't. I did take a screenshot of a time I liked once though. It is rather ironic that I am rubbish at maths.
Would Conor like "What's the time Mr Wolf?" if it was just you and him playing it and you concentrated more on counting the steps than the running around?

Harold: Here's a thought: Have you considered getting a digital stop watch for Connor and setting up a series of tasks (like fine motor closed ended tasks -- OT & ABA stuff) and have him 'stop' the watch as he finishes each one to see how long it took? Even something like to see how long he could walk on a treadmill or bounce on a mini trampoline or whatever. He could reset the time (or you could) as he does each task.. or you could preset the time limit with the the countdown to zero before he changes activities... those might be some enjoyable home diversions between 6 and 7:45 p.m.! If you are anything like us some times it takes a herculean effort to muster the energy to do anything that involves thinking after 6 p.m.! I know we play a game here called 'beat the clock' for getting ready to bed as all our kids (baby included) like to do all they can to extend bedtime as much as possible!