In Autistic children often don't know how to identify danger the Mercury News performs a valuable service by highlighting the fact that many autistic children don't know how to identify danger. This is not an aspect of autism that Dr. Sanjay Gupta or Anderson Cooper might wish to talk about on CNN but it is a fact with which many parents and family members of autistic children are all to familiar. A few years ago my son Conor wandered away from home and across a busy street oblivious to the dangers of automobile traffic. A good Samaritan stopped and helped him into a nearby Ultramar convenience store where I was able to go get him after calling 911. In New Zealand an 11 year old boy was recently killed while running alongside highway traffic.

The Mercury News tells the story of Danny Barrett an autistic San Jose boy who disappeared overnight in the woods. It also describes the realities faced by parents of children with autism:

But what's most troubling about the tendency, said Anna Wang, an advocate for children with special needs, is that autistic kids don't always understand danger.

"They don't necessarily run away. They want to explore and just wander off. But they don't know how to identify danger," said Wang, founder of the Friends of Children with Special Needs Dream Center in Fremont. "They don't know it is dangerous to cross the highway."

There are tracking bracelets available but many autistic children are sensitive to touch and do not want to wear the bracelets. In Conor's case we asked his ABA consultant for help and she designed a sub-routine involving pylon's around the perimeter of his yard and worked to teach Conor not to wander off away from home. 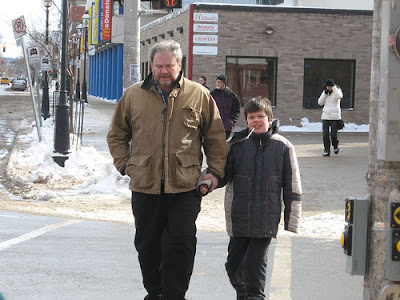 Above Conor and Dad - Photo courtesy of Charles Leblanc

We have worked with Conor on ensuring his understanding of the dangers of automobile traffic and roads ever since. And we have been vigilant, constantly vigilant. In the photo, taken last winter, you can see me walking across a Fredericton intersection with Conor ....... with my hand firmly grasping his wrist.

autism
Posted by Unknown at 6:31 am

As much as some of these kids hate wearing bracelets, I think it is one of things worth insisting on and working with the child to make possible. Not necessarily tracking bracelets, but at least ID bracelets. While I recognize that it could clearly be impossible for some autistics, I think for most it's just a (nother) sensory issue to make peace with. I remember how difficult it was to get Alex to wear one, and if it had been possible for him to get it off he would have. The clasps on Medic Alert bracelets are pretty tricky to undo, and on a very young child, darn near impossible. The bracelet he wears now would not have been the place to start as he would not have kept it on (unless I put a rivet it while it was on his arm or somehow sewed it together). When he did move to the Medic Alert bracelet with a "sports band" (much like the Road ID one he wears today) sensory issues meant he needed to take it off when he was showering or swimming as he couldn't wear it if it was wet. He no longer wears the bracelet 100% of the time but he knows to put it on whenever he is running (whether at a race or on training) and we ask him to put it on if we're going out somewhere and may be separated from him (on purpose or by accident).

Even though Alex participates in road races almost every week and often trains on the road (by our rural home or in the city) he still does not see the same degree of danger most of us do. I watched once at a race when he was almost run over by a truck. I've also seen some of his fellow runners go from being just fellow runners to "parent mode" and back again, making sure he crossed a road safely.

We worked with the department of highways here who specially created a sign for us that is now seen in spots across PEI, it says "Caution Special Needs Child" and is on our road about 50 yards from the end of our lane in both directions (one was replaced with a bilingual version a few years ago). See it here with Alex when he was less than half as old as he is now.

The issue of wandering autistics and autistics & traffic was well covered in Dennis Debbaudt's seminars.

Thanks for the reminder about Robert Dziekanski (by the way, the YouTube version of the Paul Pritchard video is more accessible). Are there any "caution special needs child" signs (like those in PEI) posted around Fredericton? If not, why not? Traffic signs are the one thing all motorists are required to notice and to obey. Regardless of opinion (or spin) about autism (or autistics), this seems like the real place to start in making streets and neighbourhoods safer for autistics.