O Conor, Where Art Thou? 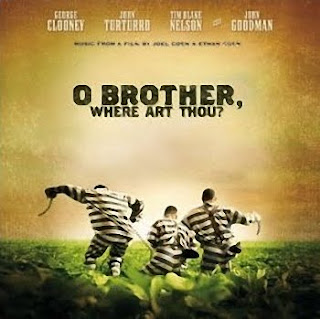 Conor loves the songs on the O Brother,  Where Art Thou? soundtrack.  He used to ask for it every time, and I mean every time, we got in the family car.  After a while we had to wean him off it so that we could listen to other music.  Conor does love all types of music and will listen to classical (especially Mozart), easy listening jazz, country, rock, blues, and ... bluegrass. But in the car for a long time he always wanted "Big Rock Candy Mountain" which is what he called the movie's soundtrack CD.
Tonight I was relaxing alone at home with Conor; his brother and mother were both out with  friends.  I checked the television guide just before 6 and saw that O Brother, Where Art Thou? was about to start on one of the channels.  Conor had never seen the movie, and we had not played the CD in a long time,  so I asked him if he wanted to  watch it to prep him in case he got over excited.  I needn't have worried.
Conor sat quietly, mezmerized throughout the entire movie.  His face lit up with a huge smile each time one of the very familiar songs played. I spent a couple of quiet enjoyable hours with my buddy ... and with the great cast and soundtrack of O Brother, Where Art Thou?.

Whoa! That movie was an interpretation of the Odyssey, did you know that? How cool is that kid! Plus the music IS cool.

Agree with Toe. It's a strange, odd movie & extremely enjoyable. What a great time you & Conor had!

Claire I didn't know that about Odyssey. I really enjoyed the time with Conor last night.

Toe and penlan I love the movie even more now how much Conor likes it.

LOL Penny that was a real funny scene.

Felt a bit bad for the kid in the movie when they sent him back with his Dad after he helped them to R.U.N.O.F.F.T.