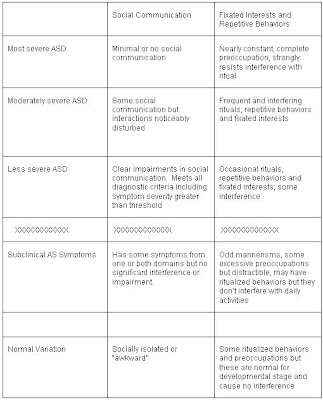 Over the last decade and a half autism has been rising with the numbers of autism disorder diagnoses increasing from 1 in 500 to 1 in 110. There can be no doubt that a significant part of that expansion occurred with the expansion of the diagnostic criteria for autism in the DSM-IV and in particular with the grouping together of autistic disorder and Aspergers Disorder in one category, the Pervasive Developmental Disorder category.  There is no serious dispute that   part of the startling increase in autism disorders is due to the  1994 changes but as 1994 recedes further into the past, and as the number of autism increases continuing to rise significantly the 1994 changes grow less and less credible as a satisfactory explanation for the rising autism disorder diagnoses. With each upward revision in autism disorder estimates by the CDC it is becoming increasingly clearer that we are in the midst of real increases in autism disorders.  Those who deny that autism is actually increasing need help in clinging to their faith like insistence that autism is not rising, that there is no autism epidemic.
The autism epidemic deniers have had to expand, and vary, their diagnostic change arguments to include increased autism awareness and ascertainment, allegedly expanded autism services resulting in diagnostic substitution and so on. Even in the face of December 2009 statements by Dr. Tom Insel, Director of the IACC, that diagnostic change and ascertainment factors could only account for approximately 50% of autism disorder increases the deniers cling to their quasi-religious faith that autism is not, can not, be increasing but they are running out of credible arguments to make their case. Even the deniers insistence that autism disorders are 100% genetic, and therefore could not possibly be increasing, is starting to lose ground to a paradigm which suggests that autism results from the interaction of genetic and environmental factors. The autism epidemic deniers are growing desperate and their assertions that autism is not increasing are growing more tired and unconvincing with each upward estimate in numbers of persons affected by autism disorders. The autism epidemic deniers need help and help may be on the way in the form of a gift from the APA ..... the DSM-5.
The American Psychiatric Association announced in press release 09-65, December 09 2009, that the DSM 5 release date was postponed with publication now scheduled for May 2013.   The postponement is probably frustrating  but, once published, the DSM-5 should still be a gift to autism epidemic deniers. The  DSM-V Neurodevelopmental Disorders Work Group April 2009 Report  recommends that  the Pervasive Developmental Disorder (PDD) category be renamed to the Autism Spectrum Disorders which will officially combine the old PDD disorders into one spectrum of disorders.  The spectrum would be divided according to severity of symptoms with new descriptions of the diagnostic criteria for each category of severity..
These changes appear to be quite substantial and may, or may not, prove to be of benefit in understanding what are already commonly called autism spectrum disorders.  But with the conversion of the PDD category to an officially recognized autism spectrum of disorders it is inevitable that those who simply do not want to believe that autism disorders are actually increasing will once again point to diagnostic definition change to explain, and deny, any future autism disorder increases. They will certainly argue, at the very least, that the 2013 increase in estimated autism cases renders it impossible to determine whether any post 2013 increase in autism estimates are real or resulting from the 2013 diagnostic changes.
Sixteen years later autism increases are still blamed on the 1994 DSM changes.  The 2013 changes should help  postpone acknowledging the reality of autism increases for at least  a further sixteen years.  The autism epidemic deniers, thanks to this expected  gift from the American Psychiatric Association, will have  a powerful new tool to continue their fight until at least 2029.

We'd fall between the " most and moderately severe" and the other would be "natural variation"... good luck in getting the school's to agree to services under mild once that goes through, and ODSP etc to also agree to disability payments as well. And you're right... now everyone with the slightest quirk - Natural variation - will fall under "autism".... Self diagnosing will become a legitimate pass-time.

http://www.cbc.ca/health/story/2010/01/28/autism-vaccine-wakefield.html I see the pro-vaccine group is still doing their "happy dance". I have yet to read where vaccine's are safe. All I've read is that Wakefield's research was done inappropriately - the birthday party, which IMO was wrong - and a slap for "how dare you go against the establishment".

It isn't going to stop those from refusing to get vaccines.

So now everyone in Neurodiversity would fit "Subclinical AS" and "Natural Variation." I've never read about anyone that would fit "Less Severe ASD."

I would think there are many children who have a wider disparity in their systems vis a vis the two columns.

U posted a comment [which I accidentally rejected] asking what was going to happen to the Asperger's diagnosis.

It APPEARS that the Asperger's diagnosis will disappear and be included in the mildly severe categories.

Some are unhappy with that change. Some very high functioning persons with Aspergers might be happy because they will find it easier to claim to be speaking for all persons with "autism".

I think part of the reason for the increase in diagnosis is that (30 - 40 something) adults with undiagnosed ASD or Aspergers have gravitated towards other adults in the same situation, got married, had kids and found their own kids on the spectrum. Upon further discovery, many have realized their own autistic / aspie traits. There are many of us out there...

Sounds like Psychiatric Politics, to me. I mean, if they had a blood, or a urine test, as with say, diabetes, we would know, in clinical terms, exactly the degree of deficit or dis-ease a person had on the autism spectrum. If you marked at a 98%, you got it bad, real bad. If you have a 52% saturation, you're just middle of the road, moderate. And, if we only found, say, a mere 2% of autism agents in your pee, well,you are otherwise normal with a slight trace of oddities.

But this diagnosis is one of observation. And Einstein handled the malleable role of the observer in his Special Relativity Theory of 1905: An observation is relative to the observer. It's quantum physics. It's weird science, but it's true. SO I do question the role of the professional observer in both Psychology and Psychiatry, to realy accurately make a diagnosis of a seering medical condition.

Can I look at you, and diagnose the severity of your cholesterol? I am thin, and mine is high, due to hypothyroidism. But you cannot gues my cholesterol by observing me.

AhhhHH! I throw my hands up in the air with fustration at this!

I'm writing to my hearts content, whatever I damwell please, on my new blog, at www.autismrox.wordpress.com

On your blog you call yourself an "autism spectrum woman".

Why? Do you have a specific autism disorder diagnosis or do you self identify with being on the autism spectrum?

Wasn't me. ;) I hadn't seen the proposal charted this way. I disagree with calling everything Autism Spectrum Disorders. Current labels under PDD are not simply levels of function. How will changing it help clinicians provide better services?? And why would they suddenly include Broader Autism Phenotypes, when we are sub-clinical, except that it fits into their linear model. Maybe to quiet those who don't buy it. ;p