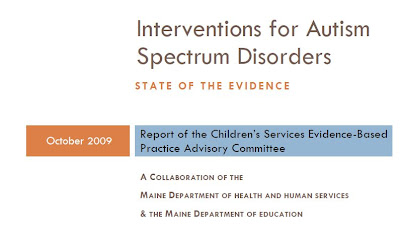 I encourage anyone interested in autism disorders, particularly parents of children newly diagnosed with an autism disorder, to read Interventions for Autism Spectrum Disorders STATE OF THE EVIDENCE October 2009.  It is a thorough,  comprehensive review, as the title indicates, of the State of the Evidence relating to autism interventions published by the  State of Maine Departments of Health and Human Services and  Department of Education.

Unlike many reviews of autism interventions it provides a detailed assessment and "grading"  of the  evidence in support of the various autism interventions.  STATE OF THE EVIDENCE in many ways is an update and further refinement of another effort by our good neighbors in Maine  the  excellent Report of the MADSEC Autism Task Force (2000).

I have always believed that an evidence based approach to assessing the efficiency of autism interventions is of fundamental importance to finding the best ways to help my son Conor grow and overcome to the fullest possible extent the deficits that accompany his severe autistic disorder.  The MADSEC report pointed clearly to ABA as the most evidence based autism intervention.  While Conor never had the opportunity to benefit from Intensive Early Behavior Intervention he has benefited from ABA.

I do not ask any other parent to take my word on what benefits ABA might or might not be able to bring to their child with autism.  I do encourage them to read credible sources about autism interventions. In the past the MADSEC Autism Task Force was the best report that I read providing a clear, well organized summary and assessment of the evidence in support of autism interventions.  The STATE OF THE EVIDENCE is an important new resource that follows the same helpful pattern.

Harold,
Thanks for letting us know about this pseudo-intellectual, government speak report that was designed and controlled by people who all profit from behavioral approaches to treating autism. It was amusing to see them give chelation the same treatment that Neurodiversity gives it. It was as if they consulted Autism Diva and Kathleen Seidel to write their report.

They were too afraid to even mention oral chelation with DMSA, DMPS and ALA. They also pretended that nobody has ever heard of methyl B-12. They just went straight to demonizing chelation by referencing one doctor's malpractice.

I'm glad your son has been able to benefit from ABA. I'm going to try it myself soon, now that chelation has made Sam high functioning enough to be able to respond to it (I think).

While this bogus report may be useful in helping people obtain ABA, it's just another roadblock for all of those kids whose brains so badly damaged by mercury that they can't respond to anything. Those kids need to have their problems addressed medically before any behavioral treatment will help them. These Maniacs refused to listen to parents.

As for my son, pre ABA we had very little way of communicating with him or managing his most challenging behavior, including self injurious behavior. He did not receive it early and intensively because the resources did not exist. Many of us lobbied and advocated intensively to make such services available and since receiving them Conor has benefited substantially although he remains severely disabled by his Autistic Disorder deficits. Without ABA though? I don't want to think about where he would be right now.

While I am a big believer in biochemical intervention, I am also a big believer in the ABA program. My son started ABA last September. I get to volunteer once a week and help with his training. His communication and understanding are at a much higher level!

Sam,I couldn't agree more.This report is nothing but government double-speak,and BS.Metals are very important,but getting rid of them is only part of the picture. You need to address the methylation and metabolic defects that cause the metals to build up,and damage the genes,in the first place,and then treat these as lifelong conditions,because otherwise chelation is just a short term fix.

Harold,I am very curious if you ever had any porphyrin or metals testing,or testing for methylation defects done on your son,if not, why?Before I started chelation all of my porphyrins were all three to five times normal.I have methylation defects in at least four different genes as well.

I am still very sick from GI, metabolic,and immune problems,but two years into biomed,and chelation,I am no well on the way to losing my autism diagnosis.This from someone with an ATEC score of over 160 before they started.

Omega3 fish oil.I credit this alone for bringing me out of the worst regression I had suffered since I was a baby,a little over two years ago.Most studies have been done with doses that are far too low to have a theraputic effect.I learned that from watching a video from Dr.Tim Buie.You need VERY high doses,to compensate for malabsorption,and inefficient metabolism.As an adult,I use twelve grams aday,with no diarrhea.

My DAN! told me before I started chelating,that my immune system, and my metabolism were too weak for most chelators,especially DMSA,and DMPS,and I was weakened by too many nutritional deficiencies.He suggested a chlorella based product,that I used three times a day,that worked very well.This could well be why so many children are harmed or killed by chelation.Doctors and parents can be overzelous and inflexible about one type of chelation or another,and about dosing,but that doesn't mean you should not chelate.

Note there is no mention of CoQ10, or amino acids either.

Roger continues to misrepresent my position on interventions for autism despite having read my blog on a frequent basis. He also distorts what I mean by neurodiversity, and this is also something he does with absolute intentionality, having read my explicit statements. No one could read my posts and assert that I am not for working hard to ameliorate the disabling aspects of autism. I discussed this with him on my blog: http://counteringageofautism.blogspot.com/2009/12/mulberry-bush-explaining-neurodiversity.html (one of the many times and places I have done so).

I find it interesting that he says he's two years into chelation when in other places he asserts he's only recently started it. I wonder if he can explain that discrepancy?

Kim Wombles,
You are a liar. You claim to support helping autistic kids but you make the idiotic statements that treatments that cure autism are quackery. Nothing you say is honest. Please stop lying about autism.