The DSM-5 revisions to what will now be officially known as the Autism Spectrum Disorders are not without merit.  The American Psychiatric Association's   DSM-V Neurodevelopmental Disorders Work Group April 2009 Report   emphasizes for the first time that there are different degrees of severity on the autism "spectrum" of disorders.  That is a good thing, one that many parents of severely autistic children will appreciate as the public consumes movie after movie about brilliant, talented persons with High Functioning Autism and Aspergers.
Having handed out that token of recognition of reality at the severe end of the autism spectrum, however, the Report then goes on to take it back by intentionally hiding the fact that approximately 80% of persons with what are currently known as Autistic Disorder also have intellectual disabilities or cognitive impairments.  It is true that intellectual disability and cognitive impairment do not receive much overt recognition in the current edition of the DSM but they are there in the description of Aspergers Disorder:
290.80 Asperger's Disorder

There is no clinically significant delay in cognitive development or in the development of age-appropriate self-help skills, adaptive behavior (other than in social interaction), and curiosity about the environment in childhood.
The description of Asperger's Disorder in the current DSM-IV results in a division between Aspergers and Autistic Disorder based on cognitive delays.  This division is not expressly mentioned at all in the proposed DSM-5.  But the 80% of persons with Autistic Disorder and intellectual disabilities or cognitive impairment will still be there ... hidden without any express mention in the severe ASD category.  There just won't be any  mention of  intellectual disabilities  and autism in polite company ... in the New Yorker Magazine ... in Hollywood movies ...  in society generally ... or in the Autism Spectrum Disorders category of the  DSM-5.

The Report also appears to broaden the Autism Spectrum,  yet again, at the high functioning end of the spectrum, by including a category called Subclinical AS Symptoms and, in what could have been drawn directly from a Neurodiversity ideological manual, a category called Normal Variation. 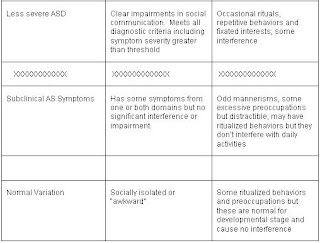 The Subclinical category expressly states that the category is comprised of persons with no significant interference or impairment while the Normal Variation simply refers to socially isolated or "awkward".  There is no explanation why such categories are included in a description of neurodevelopment disorders  if there is no significant interference or impairment; if they are just normal variations of behavior.
The DSM-5 removes any express reference to intellectual disability or cognitive impairment and adds new sub-clinical categories of high functioning persons with no significant impairment or interference. Autism,  once a neuro-developmental disorder as set out in the DSM-III,  will become increasingly seen as a  mild condition full of Temple Grandins, Ari Ne'emans and Alex Planks and a host of talented and quirky historical geniuses.
The DSM-5 has succumbed to Neurodiversity ideology, Hollywood movies and a form of  discrimination by omission against the most severely affected by autism disorders - those with intellectual disabilities requiring the most attention and assistance.  They are the invisible autistics, the ghosts of the new Autism Spectrum of Disorders about whom the DSM-5 Autism Spectrum Disorders category will make no mention.
The DSM-5 may become a useful tool ... at concealing the reality that intellectual disability and cognitive impairment are more than just co-morbid conditions associated with autism in some instances ... they are part of what it means to be severely autistic. Unfortunately the DSM-5 Neurodevelopmental Disorders Work Group has chosen to sweep intellectual disability and cognitive impairment under the Autism Spectrum Disorder carpet.

I'm not convinced those with severe autism have MR.... that IMO is the lazy version of "why should we have to teach them they'll amount to nothing anyways". B/c if that was true... my youngest just broke that rule. A speech and language impairment/delay does not MR make.

I'm glad it's gone. Also, by removing it, those with MR can no longer be dx'd with autism without the other "traits".

Thank you for this, an excellent analysis.

Do you suspect an agenda behind this latest diagnositic dictionary - ?

Why a normal variation is mentioned is a good question also. Barbara

A report published by CDC in 2009, shows that 30-51% (41% on average) of the children who had an ASD also had an Intellectual Disability (intelligence quotient <=70)

I'm betting that the intense focus makes life sensorily unbearable, and the latter makes things unlearnable. I'm hoping that I can make things much much better for all of ours.

I have the same viewpoint, just not as vague. I have an idea, and I have a plan.

Farmwifetwo,
Intelligence is normally distributed across the population. About 2.5 % of the population have IQ's below 70; i.e, more than two standard deviations below the mean.

The rate of MR in autistic disorder is much higher, but despite the claims that people with MR now getting diagnosed as autistic, the proportion of those with MR has shrunk. It is now estimated to be about 30% vs. 70% in the past.

I won't say that no one has ever been classed as autistic when their only problem is an intellectual disability, but I'll wager that the great majority of them fully qualify for their autism diagnosis.

I'm glad that your son has made such great progress. But anecdotes while worthy of investigation are not proof of anything.

We also know that many children make great cognitive leaps around 4-6 years of age. Many going from LFA to HFA and some losing the diagnosis. However some children never make that leap of even show deterioration during the same time period. Both sets of children are autistic, and except for those who lose their diagnosis, both remain autistic afterwards.

What are we who care able to do about this dire situation? I have personal experience to that proves early and ongoing intensive intervention for those who are moderately & severley delayed with an ASD diagnosis can result in much success and personal growth. These children, adolescents and adults deserve the specific supports we know they need. Those with Aspergers have presented themselves fron & center and have everyone's attention. That's not going to go away, and it shouldn't but how do we get everyone's attention for those who really need it ~ that 75 - 80% and their parents who so need our support? Hundreds of people have rallied to support one Nova Scotia mom and her daughter who is autistic http://thechronicleherald.ca/NovaScotia/1166887.html? How do we do that for so many more?

I know this post is a bit dated, but the new DSM will have a "Intellectual Disability" category, and children will be able to be dually diagnosed in both categories. One of the highlights of the new DSM will be the acceptance of cross diagnosing conditions.

Part of it is measuring IQ. It is very difficult to reliably measure IQ in autistic children- even high functioning children. We know that there is a subset of autistic individuals who are nonverbal but, when trained on an AAC device, are quite communicative. A deaf child would flunk an IQ test based on verbal language. Likewise, it is arguable that the sensory deficits in autism make it near impossible to accurately gauge the intelligence of an autistic individual. Children who undergo ABA may gain IQ points simply because they are trained in an environment (discrete trials) that closely parallels the IQ testing environment.

All of that matters little in day to day practice, though. The only reason all of the "spectrum disorders" are being combined is that they cannot find a way to reliable distinguish between the subtypes. Chris, for example, meets the full DSM criteria for Autistic Disorder and does not meet the criteria for Asperger Syndrome. In fact, he is excluded from the later diagnosis, not only because he meets the for Autistic Disorder criteria, but also because he had a very significant speech delay. Yet, he functions like a child with Asperger Syndrome. What do you diagnose him with?

I have a feeling we will see specifiers arise within the diagnosis to denote various areas of functioning- and once these are revealed it will likely make your concerns feel somewhat addressed. Terms like "classical autism", "nonverbal autism", etc are also unlikely to leave our lexicon anytime soon.

Nicole's first paragraph brings this discussion to some resolution. Thank you, Nicole.

Are there better or more accurate means of measuring intelligence?
I suspect a few driven psycho-social 'scientists' are working on methods. For now, it seems this is the best we can do.

The DSM codifies what we see. Creates a dictionary for words that imply the need for services and interventions. The DSM meets a need. For every single patient who does not fit the mold, there are many more for which the diagnostic language gives help to the people who serve the diagnosed. Barbara

"Nicole's first paragraph brings this discussion to some resolution. Thank you, Nicole."

I am glad that, for you, this brings the discussion to some resolution. For me it does not. But thank you for expressing your opinion.