Neurodiversity bloggers seldom fail to comment on any autism or Aspergers related news event. Invariably they put the Neurodiversity spin on autism disorders as they play out in the real world. It is strange that with news of the conviction of a 25 year old man with Aspergers Disorder,Christopher Monk, not a word has been splashed on the internet by the ND bloggers. 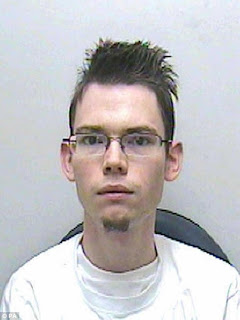 
Christopher Monk has been convicted by a British court of conspiring to have his parents murdered.   Mr. Monk, despite being 25 years old, lived with his parents who doted on him even while he spent much of his time on the internet.  One of his male friends who he met on line agreed to kill his parents at Monk's urging but failed when they fought back. The parents, notwithstanding their son's hideous crime, remained supportive of him through the trial and sentencing.

There has been no comment from the ND crowd about this case.  If this story were about a crime by parents against a child with autism or Aspergers the Autism Hub would be buzzing with diatribes against the evil parents.  Yet the ND crowd ignores a conviction of a man with Aspergers of conspiracy to murder his parents. The implications of a case such as this for an irrational ideology which sees Aspergers and Autism as just differences not disabilities or disorders is not mentioned because the case itself is not mentioned.  The strange silence of the ND crowd on this case speaks volumes about the irrational ND ideology.

Harold, I think that I would take the position of the parents in this case. I wasn't aware of it before you published it. Rather than say all ND, be more specific. I think you have a legitimate question here but shouldn't "paint" everyone with the same brush.

I also wish Neurodiversity bloggers would cover stories like these: What went wrong? What services could have been put in place to help? What could have been done differently?

Instead of using stories like these as a starting point to learn about issues affecting people with ASDs that are negative they completely ignore them, because they are negative, which is a terrible shame.

This could have been prevented.

And, realistically, why were his parents "doting" on him and not trying to get him the help and services he needs? I'm not blaming the parents because I don't know all of the details: perhaps they are in a situation similar to mine where they currently are unable to access services. This man is also high-functioning and it is harder to get help if you are high-functioning, especially if you have Asperger's.

But yes, the complete silence about cases of these from Neurodiversity bloggers angers me as well. This is what they claim they want to fix and help but they never stop to ask questions about the situation!

If it is negative, they move on...

It's best quietly filed away with Darren Harkin and Cho Seung-hui.

Now Be Silent and don't in the words of Norman Green of the UK's National Autistic Society "create prejudice" but talking about the realities of like or acting Autistic in front of the Goyim.

You can only comment on what you are aware of. You are aware of Zakh's story and yet continue to be silent regarding it, as is AOA. Don't recall AoA dealing with this story, either. Better get tweeting that they're avoiding the story, too.

His Aspergers was not diagnosed until after the murder plot; I think he is malingering, and the defense were just looking for an excuse

Unknown said...
This comment has been removed by the author.
7:27 am

it is early and I accidentally deleted your post. If you want to resubmit it I will post it. Although you may not want to. It was pretty silly.