Was the H1N1 a Fake Pandemic? A Council of Europe Motion to Investigate Drug Sellers Influence 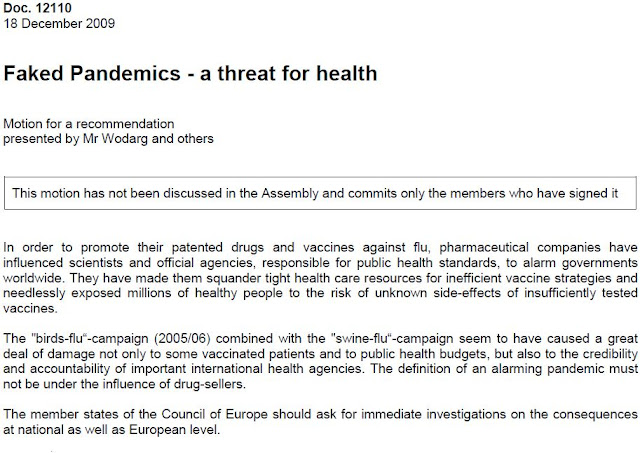 In WHO to Clarify H1N1 Data After False Pandemic Claim Bloomberg  reports that "The Parliamentary Assembly of the Council of Europe plans to debate the theme “Faked pandemics: a threat to health” at a plenary session in Strasbourg, France" next week.

Not to quibble too much with "B"but the debate is not just debate of a theme in an academic or abstract sense.  It is  debate on an actual motion which calls on the member states of the Council of Europe to conduct investigation of the influence of "drug makers" in defining and declaring pandemics.

I am not, and do not pretend to be, prescient.  I do not know what the outcome of the debate will be.  Given the emphasis placed by governments around the world on vaccines as public health tools and the active and vigorous discouragement of any debate of any safety concerns around vaccines though I would not expect to see the Council of Europe pass the motion and conduct any real investigations.  Nor do I expect the Council of Europe to find that the H1N1 Pandemic was overblown.  Of course I have been wrong before.

As for whether it was reasonably forseeable that the  "pandemic" would not be as harsh as predicted by public health authorities there were credible skeptics who questioned the pandemic rhetoric many months ago.  As with any questioning of vaccine related issues skeptics and critics of public health authorities' "consensus" on these issues were largely ignored, ridiculed or demonized.

As for whether "drug makers" or pharmaceuticals have too  much influence over public health authority decisions concerning pandemics and other public health issues I will leave that question to someone truly knowledgeable on the subject ... someone like Dr. Julie Gerberding who led the CDC from 2002 to 2009 and who will now lead Merck's vaccine division:

"WASHINGTON, Dec 21 (Reuters) - Dr. Julie Gerberding, former director of the U.S. Centers for Disease Control and Prevention, was named president of Merck & Co Inc's (MRK.N) vaccine division, the company said on Monday.... She may be charged with reigniting flagging sales of Merck's Gardasil vaccine to prevent cervical cancer by protecting against human papillomavirus or HPV. After an encouraging launch Gardasil sales have been falling and were down 22 percent in the third quarter at $311 million." [Bold emphasis added - HLD]

One thing I would like to see emerge from the H1N1 Pandemic, whether the Pandemic label was justified or not, are studies of the impact on the health, including any negative health  effects, if any, of the many people vaccinated with H1N1 shots.  In some countries adjuvants and other ingredients, including thimerosal, were included in the H1N1 shots.

One of the high priority  target groups to receive H1N1 shots was pregnant women. Some credible public health authorities, including Dr. Bernadine Healy, have pointed out that thimerosal,  a mercury based preservative, crosses the placenta.  It would seem appropriate to me to keep data on the health effects of the H1N1 vaccine on  these women and the children who received the H1N1 shots in utero.

It seems to this humble layperson that the developmental histories of children born during this time period from pregnant women who (1) did not receive the H1N1 shot (2) received the H1N1 shot without thimerosal, (3) received the H1N1 shot without adjuvants should be compared.   As someone with an interest in autism disorders and what causes them I am interested in particular in seeing a comparison of  autism rates 2+ years from now of children whose mothers were carrying them when they  received H1N1 shots containing thimerosal  and children whose mothers, while carrying them, received H1NH1 vaccine shots without thimerosal.

No I am not expecting such studies to be done and yes I do expect to be ignored, ridiculed or demonized for making these suggestions.  But I am making them anyway.

You have to boil baby bottles, you have to sterilize soothers, you have to sterilize your hands before touching any of these things... but it's ok to put vaccines full of virus' into their systems. It's ok to shoot them with K the moment they are born b/c one in THOUSANDS doesn't naturally start the process to make it themselves. You can induce Mother's for hours with drugs but Mother's when pregnant can only have tylenol and in "emergencies"... and if desperate can have amoxicillan. But they can have vaccines while pregnant... vaccines that have NO follow-up what-so-ever...

NOW... saying that, I suspect our high bp and shoddy antenatal care (although my Ped claims otherwise and my Psychometrist says "that would do it") - leaving a child who stopped moving for a day before a non-stress test (Sat), a child who's heart rate dove 4 days before when Mother arrived at the hospital with a bp of 170/110, a child who then was not born until Sun at midnight, and then by c-section after another heart rate dive after being induced (sans meds due to a prev c-section), after too many ultrasounds that now there are warnings against the abuse thereof in the news lately.... did the majority of the damage...

That same child had no reaction to any vaccines... his older bro did.

The first MMR shot he had the flu for a week... with spots... Dr's comment... it's not Rubella (coulda fooled me)... he probably caught something... Bull.... The next one was in his leg and he couldn't walk for 3 days on it.... If I'd known then, what I know now... he would never have gotten the second shot.

I'm not anti-vaccine... but I've become anti-"give it to them as infants".

I wish that you'd be honest and just state that you think that mercury causes autism....

I am honest Cheriak, if that is your real name.

I have stated several times that I am not convinced that mercury causes autism disorders. Dr. Bernadine Healy, a prominent health authority, has stated though that the epidemiological studies are not specific enough to determine whether mercury and other vaccine ingredients cause autism in some vulnerable population subsets. She also identified as an area requiring more research the effect of mercury based vaccines administered to pregnant women.


Please bring something to the discussions here in addition to your hostility and faith in the perfection of vaccines the next time you offer a comment on for this blog.

It wouldn't be the first one.

WHO changed the definition of pandemic. Now they are denying that they did so.

Plenty of evidence exists that the WHO colludes frequently with Big Pharma. The question for us as Canadians is does our government care? I conducted a survey here in Saskatchewan and have been doing my own independant research on the adjuvant component to the H1N1 vaccine (which is nearly identical to the adjuvant given to Gulf War vets) which I believe has more to do with the various neurological and immunological illnesses seen with various vaccines. My letter to Dr. David Butler-Jones was a summary of my results and to ask if an inquiry into the 'pandemic' would be conducted. He essentially told me that any review would be internal and was not even deemed to be necessary. I plan on writing him for his comments on the recent Council of Europe recommendations. If you need help with research I'd be more than happy to help.
Also, you can visit my website health page at http://www.canadianheartandpatriot.com