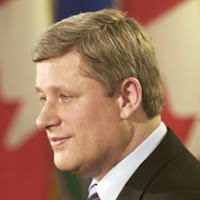 StatsCanada estimates that Canada's population will hit 32,950,734 by July 1, 2007. With the CDC figure of 1 in 150 persons having an autistic disorder there are approximately 219,672 autistic Canadians. Many autistic persons require expensive health, education and residential care services. For Autistic Canadians Prime Minister Harper's government set aside the grand sum of ...... $0

Some lesser politicians might have tried to fake it and pretend that they were concerned about Canada's autistic population. Stephen Harper, to his credit, does not try to pretend. He does not give a damn about your autistic loved one and he does not care who knows it. He does, at least, have the virtue about being honest about his disregard for autistic Canadians.