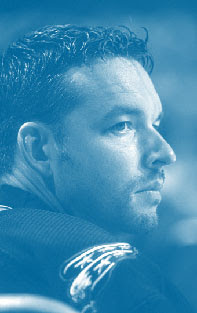 "With the diagnosis of autism comes shock, but then comes the nightmare of trying to figure where to turn. ... You can just give up and quit, but then quitting will only get easier,"

The Montreal Gazette is carrying an informative article on Olie Kolzig, goaltender with the NHL Washington Capitals, and founder of Athletes Against Autism. Mr. Kolzig was sporting the blue puzzle piece pin of Autism Speaks which is a world leader in creating autism awareness and generating funds for research and treatment.

"A developmental disorder of the central nervous system, autism for Kolzig is more than a unique lapel pin. It is the life mission for the Capitals goaltender, its reminders as near as his own 6-year-old son, Carson.

The boy's affliction has changed the life of Kolzig and his wife, Christin, also parents to Kendall, 4, and Ashlyn, 3. But the NHL all-star has chosen to look beyond his own home to also make a difference for thousands of children and adults he'll never know.

The autistic are affected, often severely, in their ability to communicate or interact socially with others. Children are ridiculed or cruelly excluded by their peers, making adolescence a horribly difficult time.

Kolzig is putting his fame to excellent use, having co-founded Athletes Against Autism (AAA), under the umbrella of Cure Autism Now (CAN). He is joined by friends and fellow NHLers Byron Dafoe and Scott Mellanby, also fathers of autistic children.

The group's goal, leaning on the celebrity of its three leaders and the support of many others, is to raise awareness and money for autism research, treatment and education programs.

With a strong body of famous athletes and plenty of resolve, AAA continues to grow, speaking with a clear, passionate voice that's increasingly being heard by decision-makers."

The Athletes Against Autism website can be found at: