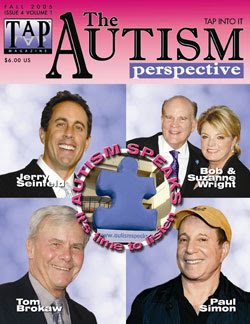 Autism Speaks has filled a leadership vacuum with its effective leadership on behalf of autism. Autism awareness and funding for autism research will be raised by Autism Speaks walks across North America. The public communications power of entertainment and political stars such as Senator Hillary Rodham Clinton, Toni Braxton, Bill Cosby, Jerry Seinfeld, Paul Simon and many others, has been harnessed to raise awareness and funds for research. Legislative initiatives such as Senator Clinton's recent Expanding the Promise initiative in the US Senate have been undertaken. The Autism Every Day video featured at the Sundance Film Festival has helped the world move past the Rain Man/Savant stereotypes and understand some of the harsher realities faced by many autistic persons and their families.

As the parent of a profoundly autistic 11 year old boy in New Brunswick Canada I have been involved in autism advocacy for 8 years. Lack of knowledge by important government decision makers and by members of the public has been a huge obstacle to overcome in trying to improve the life prospects of autistic persons in our neck of the woods. The incredible media power of Autism Speaks, the focus on doing something positive for persons with autism, has helped, and will continue to help all of us fighting for improved treatment, education and residential care for persons with autism - wherever we live.

Thank you Autism Speaks.
Posted by Unknown at 7:25 am