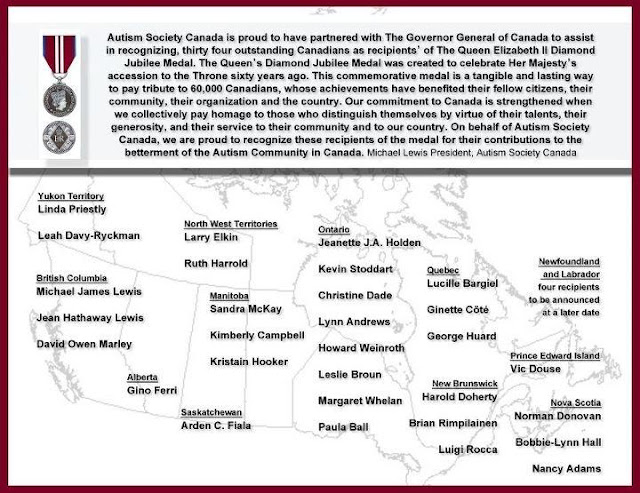 I am not spurning the recognition nor arguing with the list of autism advocates recognized by the Autism Society Canada in partnership with the Governor General of Canada with Queen Elizabeth II Diamond Jubilee Medals.  I do not seek medals of any kind or financial reward for my autism advocacy, I seek better treatment, better services, better lives for my son and others for whom autism is a serious disorder that limits their daily functioning (DSM5) and limits their lives. But it is nice to be recommended by the Autism Society Canada which is also itself comprised of autism advocates.  I have to point out though a curious anomaly that occurred with the New Brunswick recipients ... three men and no women were named despite the important role of so many women in NB autism advocacy.  Also one person with Aspergers who contributed here in New Brunswick, and in Senator Munson's autism proceedings, was also left off the list.

This might be just a question of numbers, with three allotted for NB,  but the reality is that in New Brunswick far more women than men have been involved in public autism advocacy and many of them have played very important roles in bringing New Brunswick international recognition for its autism services and programs (even though more progress is still needed).

I am listing the following names of women in New Brunswick who I know advocated publicly and with great result.  More names could be added for sure but these are some that I know first hand are  deserving of recognition for their efforts.   Personally I did not seek the same goals as some of those listed  but they were all persistent, effective autism advocates.  In alphabetical order (by last name):


In addition to the omission of women from NB's list of recognized autism advocates it would be just plain wrong to ignore the very important efforts and contribution of a person with Aspergers who overcome some of his own personal challenges to speak publicly in front of parents' meetings, sat on the ASNB Board of Directors and was recognized and quoted in Senator Munson's autism report Pay Now or Pay Later:


(…) if you pay for it now, look at the return you will get on your investment. The people with autism will get out in the real world and get jobs, and that will stimulate the economy. Or you can pay later, which means they will go into group homes and it will cost the taxpayers a lot of money in the long run to keep them there.


I am sure it was difficult for the Autism Society Canada people who had to pick the names of autism advocates across Canada to receive medals.    I simply want to highlight the many women, and Jason Oldford a gentleman "on the autism spectrum", who also made very large contributions to autism progress in New Brunswick.
Posted by Unknown at 7:54 am

Harold,yours is the only name a lot of non Canadians recognize.I know your blog is read all over the world.If you want to bring attention to the work these people do,it might be a good idea if you wrote about them,nobody else is.At least to a wider audience.

I'm not here for the recogniton, never was, rather advocating for Justin and all the others with autism. But thank you Harold for mentioning all of us women, and especially Jason! He is so inspirational and genuine.