Autism Now 1 in 50? Round Up the Usual Suspects AGAIN

From last years increase of autism prevalence rates from 1 in 110 to 1 in 88 a new report, based on parental reporting now indicates a rate of 1 in 50. Time once again to call out Inspector Renault (looking much like Insel, Grinker and other autism can not really be rising true believers) to round up the usual suspects of increased awareness, ascertainment and any other non environmental excuse they can manufacture to rationalize the failure to conduct the necessary environmental research into autism causation. Following is last years comment on the tired and pathetic posturing of the autism epidemic apologists: 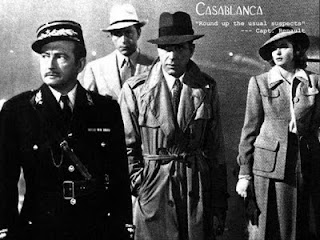 The people habitually suspected or arrested in response to a crime. The phrase is usually used in regard to scapegoats rather than actual perpetrators of the crime in question.

This expression has a specific and unambiguous origin. It was spoken by Captain Louis Renault, the French prefect of police, played by Claude Rains in the 1942 U.S. film Casablanca. The context was a scene in which the Nazi, Major Strasser is shot by Humphrey Bogart's character, Rick Blaine. Renault was a witness to the shooting but saves Rick's life by telling the investigating police to "round up the usual suspects"."

CDC Director Dr. Thomas Frieden, playing the part of Captain Renault from the film classic Casablanca, rounds up the usual suspects as the CDC announces stunning new autism rates in the US of 1 in 88 children, 1 in 54 boys:

There is no dispute that diagnostic change, increased awareness and better detection probably explain some of the repeated and astonishing increases in autism diagnoses.  There is, however, no definitive study, or group of studies, which assigns 100% responsibility for the pre-2012 increases entirely to these factors.  There is absolutely no credible basis for anyone to state that the recent increase from 1 in 110 to 1 in 88 over a period of a few years is entirely attributable to diagnostic and social factors.

Autism research funding has historically been directed overwhelmingly towards genetic autism research.  Only in recent years has any significant support been provided for environmental causes or triggers of autism, causes and triggers which might, and probably are, involved in these stunning increases in the numbers of children diagnosed with autism.

The safe route to take in the face of such astonishing numbers is to invest more monies in treatment, education and residential care of those affected by autism disorders and to invest substantially more research dollars in exploring the environmental causes of autism disorders.  We must search for all the possible suspects as we try to determine what is causing the epidemic of autism disorders that increasingly affect more and more of our children.
Posted by Unknown at 6:40 pm

Or they are diagnosing every child that barely makes the criteria of the IV before the more stringent of the V... but that's just my opinion.

Give me a break Farmwife. There has been a huge explosion in severe autism and the numbers reflect that. If you don't believe there is an increase then you really need to get a reality check.

Inarguably, there is a real increase in what I call "we ain't kidding" autism. Similarly, inarguably, the ASD Dx is a golden path to services, while many others are facing cutbacks this are is often getting increased funding, or less-sharp cut-backs. SO professionals have a secure funding stream, and worried parents are securing interventions.
There are no easy explanations.