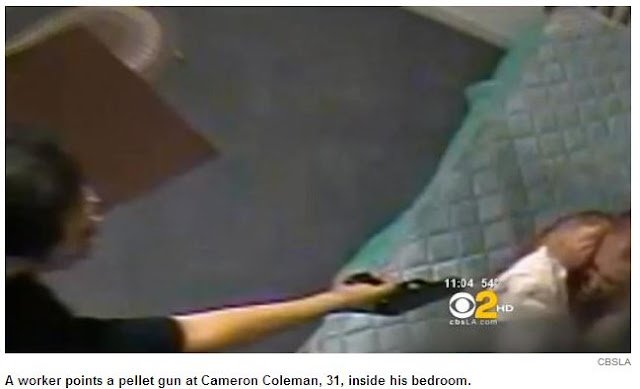 KCBS-TV  Los Angeles "Mom Sickened" and the New York Daily News "Tantamount to Torture" report a story of horrific, torturous abuse by professional caregivers of a 31 year old autistic man with the reported mental age of a 3 year old.  The incredible abuse was discovered after the man's mother noted bruising on his body and installed cameras which recorded the abuse.  The CBS video report follows but as CBS cautions this is disturbing especially if you are the parent, as I am, of a son or daughter with severe autism:


While the depravity of this abuse may be unprecedented similar abuse has been reported in the past. Security cameras unknown to the abusers have been the most reliable way of bringing such abuse into the light of day. In 2007 in a New York group home a severely autistic woman was beaten by attendants, abuse which was only discovered by cameras.  These are incidents where cameras caught the abuse of persons with severe autism and intellectual challenges, persons who could not speak up for themselves. The odds are good that where those cameras are not present similar abuses will occur and will go unreported.


Cameras are the only protection many severely challenged persons with autism will have and should be mandatory in all facilities and homes where care is provided for those who can not speak for themselves. Severe autism realities must not be ignored, can not be ignored. If we ignore these realities, if we fail to protect our loved ones who can not protect or speak up for themselves we are abandoning them to cruel fates. Steps must be taken to ensure they live in decent, safe conditions.
Posted by Unknown at 2:31 am

The self-diagnosed will freak at this suggestion - even though they are verbal and more than capable of expressing themselves. Thisnk about the elopment nonsense...

I recently gave cameras a lot of thought because my son's therapist recommended them as part of a behaviour modification plan. I ultimately said no - on the other hand, my guy was placed in a residential school in Pennsylvania, far from me, and presented all manner of injuries every weekend - which no one could explain (including him). Cameras would have been welcome. In the first instance, I see my guy several times a week - we go swimming, so I can do a "body check" for injury when we're changing. In the second case --- multiple investigations by PA deemed complaints unwarranted.

One thing that MUST be considered: who will review the tapes, or watch the cameras? If guardian/advocates aren't aware of abuse, they may not be involved enough to want to look at tapes... the State will plead poverty to avoid assigning anyone to the task, and the Agency/Insitutions themselves cannot be relied on to self-report.

BTW- the PA school is the same on where two guys died in the space of year. It is also THE economic engine in the area, and, like the infamous JRC, a good number of the "students" are from NYC. Distance from, and lack of, natural, associational supports and advocacy support this abuse.