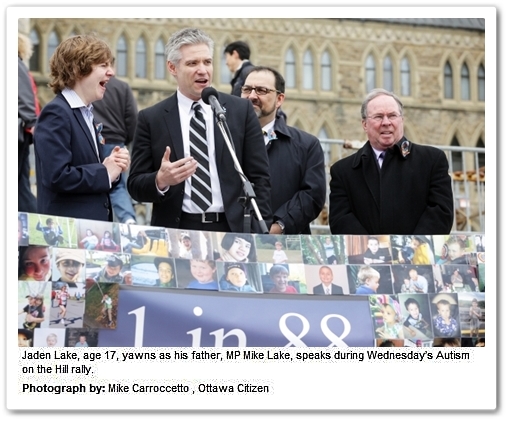 Edmonton MP Mike Lake, whom I have met (at IMFAR 2012 in Toronto) and communicated with a few times about autism in Canada, have different perspectives on the proper role for Canada's national government in addressing Canada's autism crisis.  The government of Stephen Harper, of which Mike Lake is a member,  is not a strong supporter of Canada's national medicare system generally and has done nothing to advance in a meaningful way the National Autism Strategy advocated for by former and present opposition MP's Andy Scott,  Peter Stoffer, Shawn Murphy and Glenn Thibeault and by Senator Jim Munson.   I know though that Mike Lake is a dedicated father and a strong advocate for his 17 year old autistic son Jaden, who appears to have many similarities to my own son with autism of the same age.  I enjoy seeing Jaden in television and video appearances and was pleased to read the Ottawa Citizen article about the Autism on the Hill Rally and the pictures featuring Jaden Lake.

Thank you for advocating for autism awareness and services Jaden! Well Done!
Posted by Unknown at 3:46 am