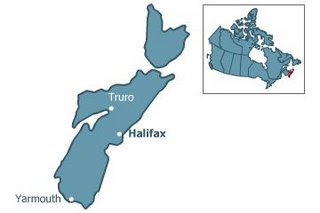 I met Jim Young a couple of years ago, May 26, 2007 in Dartmouth, Nova Scotia, at the FEAT-BC Goes Coastal kick off of the national autism strategy campaign. Jim and I had a chance to talk briefly. He got straight to the point in discussing autism and the state of autism advocacy in Nova Scotia. In a guest column in the Halifax Chronicle Herald Jim once again delivers hard hitting autism reality without any sugar coated joy of autism nonsense.

Jim offers the perspective of a father of an autistic child who fights hard to make life as good as he can for his child. He has done his homework on a number of contentious autism issues and he has been an active autism advocate. In this article Jim addresses many of the contentious autism issues that hinder the ability of parents to help their autistic children. He offers his views on autism cures and treatment favoring an evidence based professional treatment that stands out above all others at this time - Applied Behavior Analysis - ABA.

Jim expresses his admiration for high functioning autistic persons who do well in the world but pulls no punches about the leaders of the Neurodiversity ideological movement and the threat they pose to the health of our autistic children:

The neurodiversity proponents do not represent the realities faced by the majority of families. My view is that they represent a real threat to the health of our children. Not only do they imply that it is fine to have autism but they urge us to "celebrate" our children’s disorder. Nonsense. Should we "celebrate" juvenile diabetes, leukemia, pediatric aids, fetal alcohol syndrome?

I can testify that there is very little about autism to celebrate. I love both of my children and could not love my daughter, who is deeply affected, any more if she woke up tomorrow without autism. But I will continue to advocate and provide treatment opportunities for her forever, despite what these people say.

Autism is a serious health issue requiring aggressive treatment. It is not a learning disorder, lifestyle choice or expression of individuality. The risks of claiming that it is, for the rest of us, are that it provides government just the excuse they need to withhold funding – the community is divided and the disorder is not an alarming epidemic. These people need to shut up. They do not represent the children with autism that I see. They represent themselves, which is fine, but no one else.

I encourage anyone interested in autism, particularly parents of children newly diagnosed with an autism disorder to read Jim's column in the Chronicle Herald. It offers a healthy dose of autism reality, straight up, with no joy of autism, neurodiversity nonsense, to divert you from helping your autistic child.

I just have one change to his statement.

"That parents be allowed to access whatever means of therapy they feel will most meet the needs of their family".

Not all families like ABA - like the IBI horror we ended up in - not all of us dislike all parts of ABA - like token systems - but we should be allowed to mix, match and modify therapies for our children.

We should be part of the team and not have to write emails to school officials, b/c we can't get meetings, that say "I'm tired of being treated like I'm uneducated white trash".

He's a smart, sensible man. I hear what he is saying; the children in my daughter's autism program at school are going to be in serious trouble when they reach adulthood if the ND crowd is who the government listens to.

The trouble is,that the more disabled autistics,whether it is those with lower functioning forms,or those whose autism is merely one part of a more complex condition,are nowhere near as vocal,and activist-minded as the neurodiversity crowd is.

If we had been as active,as the antivaccine groups(Arguably the most vocal of all autism groups out there.I am sure there are a lot of unaffected,uninterested people who think autism didn't exist before the MMR shots,and somehow one caused the other.),perhaps society would have ridiculed such ridiculous ideas as autism pride day,before it even got off the ground in the first place.

As a seriously disabled autistic, who still lives at home,I can understand how difficult it is to become involved in activism,but we really need to start our own movement to counter these people.

I realize this may sound naive,but for now,we sholud also be engaging these people in intelligent debate. I realize this nay be hard to believe,but I have found a lot of people,both at Left Brain/Right Brain,and at Michelle Dawson's blog,
in particular,that go around ta1king about neurodiversity,who are unaware there are seriously disabled autistics out there.These are people who live in their own little self-affirming world,and that's all they know.

Getting angry,and confrontational only causes them to ignore what it is you are saying,and revert to the typical neurodiversity line they are spouting.I hate to say it, Harold,but I have seen this in some of the threads you have been involved in,over at LB/RB.

Even if they are not autistic,a lot of these people definitely have emotional,and personality problems,and you need to handle them with the proverbial kid gloves.You learn a lot about how to handle people like this,when you grow up with a sibling,who has high functioning autism,and is prone to violent,and destructive behavior.

The neurodiversity movement is not as big as you,or they,would like to think it is.I have met a lot of parents of autistic children,who have never heard of it.

Maybe the ND movement can read this and get a reality check.

It is appalling that there is a lottery system to determine which children to help.
I have also seen many adults with special needs locked in a room in a hospital for months because people are scared of them.
Do they not have as much rights as anyone else. I am disgusted