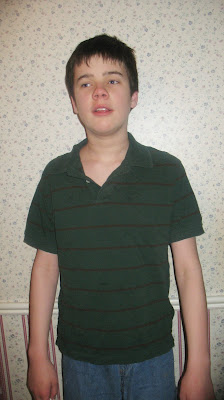 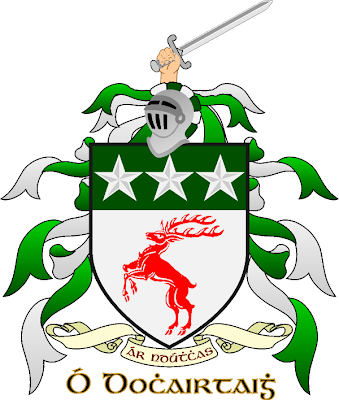 Who so ever asks me of my birth...
I will tell them I am born of Irish Princes who ruled in Donegal a thousand years ago; that I am descended from the High Kings of Ireland, and my name is from the Clann ÓDochartaigh!

There are many spellings of the surname DOUGHERTY. Regardless of which one you use there are at least a dozen versions apart from with or without the 'O'. All of these, however, have their roots in the Finn River Valley, in Inishowen, in the beautiful county of Donegal. It is it is believed to be one of the oldest hereditary surnames, and translated from the Irish Gaelic it is commonly accepted to mean obstructive. There are some who claim that it means 'The People of the Oak Houses', but this is a rather recent development, and rejected by most Gaelic scholars with whom our editor has consulted. It is the most common name in Derry City and Co. Donegal, Ranking fifteenth in the list of 100 most common Irish surnames. The motto of our coat of arms is Ar nDuthchas (for my heritage). There is much evidence at hand show that this coat of arms can also be linked to the MacDevitt, McDaids, McDades and the Bradleys, to name a few. The O'Dochartaigh Clann originated in Inishowen and got their name from Dochartach, son and heir of Maongal, the grandson of Fianan, Lord of Inishowen, was the third son of Ceannfaola, prince of Tir Conaill, and the twelfth in lineal descent from Conall Gulban.
.......

As far back as we have been able to trace, our history begins with Niall of the nine hostages who was the High King of Ireland from 376 to 406. As his name denotes Niall took many hostages in his campaigns including a boy by the name of Patrick (who would later become Saint Patrick) in the year 403 AD.

The family O'Dochartaigh is decended from one of Niall's sons; Conall Gulban. It was after Conall that the land of Tyr Conaill was named. Tyr Conaill is known today as County Donegal. County Donegal today almost exactly traces the boundries that outlined old Tyr Conaill.

Starting during the year 1200 the clann held undisputed power over the Inishowen peninsula where they held over 300,000 acres and many castles, the ruins of which are still visible today.

In the historic rebellion of 1608, Cahir O'Doherty aided by the Clann McDevitt captured the fort at Culmore, burned the city of Derry and killed the English Governor, Sir George Paulet. Cahir O'Doherty was slain at Doon Rock, Kilmacrenan, attempting to maintain his clann's territory. He was decapitated and his head was displayed on a pole outside Dublin Castle for centuries after. It is safe to assume that Cahir was the last of the Gaelic Irish chiefs. Cahir O'Doherty's sword is preserved at the Mayors Parlour at the Guildhall, Derry City.

The meaning of the name O'Dochartaigh is disputed widely. Researchers at the Clann O'Dochartaigh World Headquarters with the help of a researcher by the name of Russel have concluded that the name means "Destroyer" and that it is one of the oldest surnames in all of Europe (est 880 AD). The name came into use from actions on the battlefields of old Tyr Conaill. The name Docartaig was given to Donal as a nickname. The clann ruled the Finn River Valley at that time. Two generation later came the first O'Dochartaigh, (or
grandson of..). The Finn River Valley was pastorial land and this clann with it's growing numbers and greater strength, moved up into the rich Lagan Valley, slowly clearing and cropping this new land. The O'Cahan and their kindred the O'Neills opposed the O'Dochartaigh.

One of the more important battles saw the death of a Clann Chief, Devitt, (1208). It was from the Devitt that the McDevitt & McDaid clanns sprung.

Farther north, the Inishowen became a battle ground between the Cineal Owen, (McLaughlin vs. O'Neill).

To shorten the story; upon the defeat of McLaughlin's, the O'Dochartaigh moved into the Inishowen peninsula (the 300,000 acres referred to earlier) becoming chiefs of that peninsula until 1608. There have been Doherty's living there before the 1200's. In the rich land at Culdaff and O'Dochartaigh's Island, (today known as Inch) some O'Dochartaigh stayed in the Finn River Valley, some went in other directions, such as: Genties, Kilmacrenen, Killybetgs and Ballyshannon. Their first power-base in the Inishowen was at Castleross at the mouth of the Shanagore River. Conor had 5 sons, thus the O'Dochartaigh Dynasty.

Today, we have Don Ramon O'Dogherty as our rightful bloodline chief. He is a member of the Standing Council of Chiefs and Chieftains and is recognized by the Chief Herald of Ireland as the O'Dochartaigh of Inis Eoghain.

Wishing you and your family a Happy St. Patrick's Day. Coming from a greek background filled with many important customs and traditions, Lea and I can both relate to the importance of holidays.We're hoping to attend the St. Patrick's day Parade this Sunday in Montreal. The parade is a local tradition from 1824.I suppose you will be attending your local parade with your family.Have a great time!!!