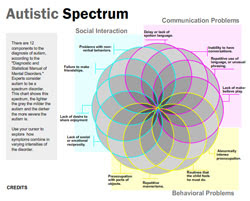 Lexi Cota's tutor, Sara English, coaxes her to repeat an "mmm" sound for a spoon of frosting.
(Journal Photo by Lauren Carroll)


The Winston-Salem Journal has done some excellent work on autism with this article and video Living With Autism. The article, interactive graphic and video do an excellent job of presenting the realities of life for an autitsic child and her family. It is done with a positive, but realistic, presentation of the challenges facing autistic children. And it cuts to the chase in telling parents of autistic children what they need to know. ABA based early intervention is critically important for your child's future. These pieces also present very well the challenges faced by parents in trying to educate their children including the inadequacies of the formal education system in helping educate autistic children.

"The Gordons suspected that Ross had autism when he was 6 months old, said Kristi Gordon, his mother. He never responded to people or toys, and could spend hours spinning things.

The diagnosis was confirmed a year later.

“No matter how much we thought it, it still kind of crushed us,” she said.

Others, like the Cotas, watch their seemingly typical child change into someone they don’t recognize. When she was a year old, Lexi was a charming, typical toddler, one who loved to pop out from behind doorways and say “hi!” Then, when she was about 16 months old, she began to change. She became at turns silent and withdrawn or unruly, running around and flapping her arms wildly. She was diagnosed with autism a few weeks before her third birthday.

No matter when they get the diagnosis, the message that goes with it is the same: Get help now.

Many experts say that children who are placed into therapy as soon as possible have the best chance of eventually living a relatively independent life in which they will be able to have a job, even if their social mannerisms are unconventional.

“When you see them young, and 11/2, 2 and 3, you have no way of knowing which child will respond well to intervention and which won’t. The idea is you provide intervention and treatment when they’re young,” said Dr. Kurt Klinepeter, an associate professor of pediatrics at Wake Forest University Baptist Medical Center and the medical director of Amos Cottage. Amos Cottage is affiliated with Wake Forest and offers services for children with developmental problems.

It’s difficult to tell how many children have other conditions that co-exist with the autism. About 30 percent of autistic children will have IQ scores in the normal range. Those children will have the best chance at eventually living independently, with jobs and typical lives - not just because they score well, but also because they have to be on the higher-functioning end of the autism spectrum to be able to take an IQ test at all, Klinepeter said.

The other 70 percent aren’t necessarily mentally retarded, he said. They could be more affected by the communication and social aspects of the disorder, which would make it nearly impossible to correctly administer an IQ test.

Children who are suspected of having autism usually end up at the county’s early-intervention program, either through a referral from a doctor or day-care worker, or because the parent is concerned enough to want an evaluation.

Many parents want their children to receive Applied Behavior Analysis. The National Institute of Mental Health, the leading federal agency for research on mental and behavioral disorders, said that ABA has “become widely accepted as an effective treatment” in its booklet about autism. ABA is the only treatment specifically mentioned in the booklet.

http://extras.journalnow.com/multimedia/2007/autism/autism.html
Posted by Unknown at 4:45 am