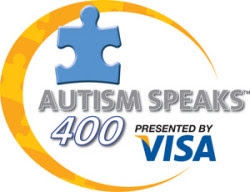 Autism Speaks continues its outstanding efforts to raise autism awareness and funds for autism research with its latest effort the Autism Speaks 400. This is another terrific way to tell the world about autism.

“Thanks to Visa's commitment, this event marks the first time a NASCAR NEXTEL Cup event entitlement has been dedicated to a not-for-profit organization,” said Mark Rossi, vice president of sales & marketing for Dover Motorsports, Inc. “Millions of fans watching the race on Fox around the country, along with our loyal fan base here at the track in Dover, will be exposed to the ‘Autism Speaks 400 presented by Visa' messaging. The end result will be increased awareness, and additional funds, to assist the many important initiatives of Autism Speaks.”

From now until June 1, Dover International Speedway will donate $5 to Autism Speaks from each ticket purchased with a Visa card for the June 3 “Autism Speaks 400 presented by Visa” race. Fans can visit www.autismspeaks.org to learn more and donate to this worthwhile cause.

As part of the entitlement, a special one-of-a-kind experience will be auctioned, with all proceeds going directly to Autism Speaks. The prize includes the opportunity to wave the green flag as the honorary starter for the June 3 race; an autographed flag signed by the starting lineup of the NASCAR NEXTEL Cup Series race; the chance to be on stage for driver introductions; a ride in the pre-race parade lap for four guests; four tickets to watch the race from a skybox suite; four pit passes; and a guided tour for four of the NASCAR NEXTEL Cup garage. To participate in this unique auction and support Autism Speaks, go to
www.autismspeaks.org/dover400.

http://www.autismspeaks.org/press/dover_400.php
Posted by Unknown at 2:04 pm