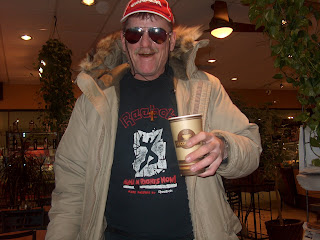 Early this week I sat down for a coffee at the Second Cup with well known New Brunswick blogger, political activist and pain in the neck Charles LeBlanc. I arrived early and waited with my camera concealed below the table. As Charles approached I snapped the photo above. The Blogger has been blogged!!!

I met Charles a few years ago through my autism advocacy. Charles was already known as an ADHD activist who brought to public attention the issue of over prescription of Ritalin for New Brunswick school students. He also pitched in on behalf of autism, attending rallies, putting up posters and helping with our Christmas parade float on one cold, wet, windy day in Fredericton. His blogging is often over the top in style and substance and has been known to infuriate some. But Charles also raises issues that the main stream media are reluctant to feature. As CBC reporter Robert Jones pointed out in a segment which aired the night before commencement of Charles's trial on obstruction of justice charges arising out of the Atlantica conference protest, Charles blog site features pictures of the homeless and disadvantaged and brings their issues to public attention. Friends of mine in government tell me that many politicians and civil servants read Charles' blog site regularly. In Charles the poor and disadvantaged in New Brunswick have a voice by which they can speak to power and have their issues heard.

http://oldmaison.blogspot.com/
Posted by Unknown at 5:26 pm

Interesting - what a wide gambit. Thank you

1. An opening in chess in which a minor piece, or pieces, usually a pawn, is offered in exchange for a favorable position.
2. A maneuver, stratagem, or ploy, especially one used at an initial stage.
3. A remark intended to open a conversation.

[Ultimately from Spanish gambito, from Italian gambetto, act of tripping someone up in wrestling, from gamba, leg, from Old Italian. See gambol.]

USAGE NOTE Critics familiar with the nature of chess gambits have sometimes maintained that the word should not be used in an extended sense except to refer to maneuvers that involve a tactical sacrifice or loss for some advantage. But gambit is well established in the general sense of “maneuver” and in the related sense of “a remark intended to open a conversation,” which usually carries no implication of sacrifice.