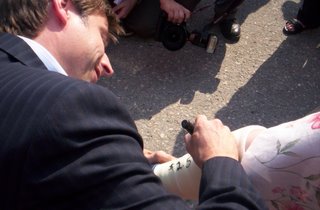 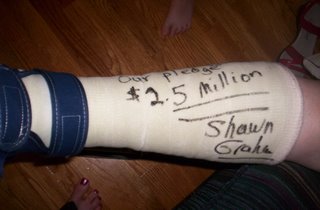 All three parties were asked during this campaign about what commitments they would make on behalf of autism in NB. If not during an election campaign when, if ever, would they make a commitment? Only the Shawn Graham Liberals responded with a specific commitment of $2.5 million including a commitment to train 100 TA's and Resource teachers each year for the next 4 years. Last night in Miramichi Liberal leader Shawn Graham signed on the dotted line leaving no room for anyone to cast doubt on his party's commitment to persons with autism.
The cast Shawn Graham is signing belongs to Autism Society President Lila Barry. The photos were taken by ASNB Miramichi Rep Geri Donahue. There is an interesting story behind how Lila broke her leg but I will leave that to her to comment on if she chooses.
Posted by Unknown at 11:40 am

I was rushing down my basement stairs to watch the first debate, hoping autism would be addressed. I didn't get the opportunity to hear the leaders because in my rush I fell breaking an ankle. Thought to myself after,hmm "the politicans had sweet revenge on me". Ouch, that hurt!

I think Graham will be a great Premier!