Auton's Other Shoe Falls in Ontario - Autism Parents Get Political 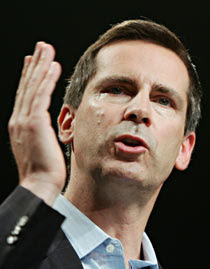 In the Auton decision the Supreme Court of Canada denied the protection of the equality provisions of the Canadian Charter of Rights to autistic children in need of Applied Behavior Analysis treatment for their autistic condition. That decision was part of a long trend of cases by which the Supreme Court articulated a judicial policy of deference to government decision making on issues involving the public purse.

With the courts and legal process effectively denied by the Auton decision, a decision confirmed in its effect, if not in legal theory, by the Deskin-Wyneberg case out of Ontario, parents of autistic children seeking access to services for their children are getting political in a big way. The following story describes the intention of autism parents in Ontario - they are going to politically dog the steps of the Promise Breaker - Dalton McGuinty.

The ABCs of Ontario Election 2007. The first in an ongoing series examining the issues in the countdown to the Oct. 10 vote, beginning with autism.

Mike Harris was swarmed by Kraft Dinner-throwing poverty protesters in 1999.

Now, Premier Dalton McGuinty can expect to find his election steps haunted by a group of parents who intend to make autism front and centre in the coming provincial campaign, which gets officially underway on Sept. 10.

Richmond Hill's Taline Sagharian, the mother of a 10-year-old son, told Sun Media last week this new group is determined to play a "very strong" advocacy role in the election, bringing the issue directly to the politicians on the hustings.

"It's a small group of families right now, but it's snowballing," she said. "It's going to be a new and different thing."

The group is in its infancy -- members are still choosing a name -- and it's debating a number of possible actions.

In particular, they're focusing on issues around Intensive Behavioural Intervention therapy (IBI): The long waiting list for government support, the gap between what the government pays and what the service actually costs, and the lack of IBI in public schools.

With these supports, children with autism can lead more rewarding and productive lives, Sagharian said.

Without access to this expensive but effective form of therapy, children with autism may face a bleaker future in even more costly group homes.

WHAT THE LEADERS SAY

- Dalton McGuinty (Liberal): "I'd ask Ontarians to take a look at what we inherited and what we've done so far. There were no services available for children once they reached the age of six; they were cut off. That was a Tory policy. We've changed that. Furthermore, there were no services available in our schools. We've changed that as well. We've more than doubled the funding available for our children who are affected by autism." (Sept. 25, 2006)

- John Tory (PC): "We're going to do what we say we will do. Clear the waiting lists, respect parents, and give vulnerable children the support they need -- these steps will be job No. 1. People will be able to rely on my word." (Feb. 23, 2007)

- Howard Hampton (NDP): "Children with autism and their families need action, not buck-passing. They need someone to stand up for them and their kids. I am calling on Dalton McGuinty to do the right thing and extend IBI treatment to every child who needs it without delay. It's only fair." (June 27, 2007)