Autism Stakeholders' Symposium - Where The Heck Are You? 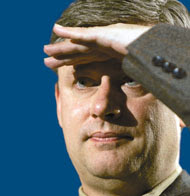 Watching Dr. Seuss's Pontoffel Pock, Where Are You? video on Youtube with Conor for the kazillionth time I started thinking about other people and things that had gone missing and I thought of the Autism Stakeholders' Symposium which had been one of the corner stones of the feeble National Autism Strategy of Prime Minister Stephen Harper. A one page web site and a national autism stakeholders symposium. It is difficult to imagine a weaker response to Canada's national autism crisis but Harper watered down his already incredibly weak response by canceling the stakeholders' symposium. Why?

Purportedly because the federal government, which can handle the logistics of sending Canadian troops and armaments to far parts of the world, could not locate a big enough room in which to stage the event. The largest purchaser of convention space in the National Capital Region couldn't find a big enough room. Does anyone actually believe that nonsense? I don't. I admit it. I do not believe the Government of Canada could not find premises in which to house the Autism Stakeholders' symposium. I do not believe that the Government of Canada was telling the truth about its reasons for canceling the Autism Stakeholders' Symposium.

OK, so why was the symposium canceled? The real reason the Government of Canada canceled the symposium was because it heard that serious autism advocates were going to be attending as autism community representatives. The old, complacent, Autism Society of Canada leadership that had nodded in agreement with the federal government's position that the federal government should stay out of autism issues, was gone. New leadership at the ASC was nominating a delegate crew that would include some of Canada's most outspoken autism advocates. Not much opportunity for a good PR photo op and spin job when you have to deal with parents who have for years been writing letters to government and media, holding signs in protest outside government buildings and going to court seeking inclusion of autism treatment in Canada's national health care plan. With no PR upside and plenty of potential for a PR fiasco the government of Stephen Harper "postponed" the symposium.

No word has yet emerged of a replacement date for the "postponed" autism stakeholders' symposium. The Harper national autism strategy is now just a one page web site, with information that could be found with the simplest Google search, and nothing more. Mr. Harper might as well have announced he was "postponing" the hopes of a generation of families with autistic children living in the less affluent regions of Canada. For these autistic children there is just not enough room in the heart of Stephen Harper.
Posted by Unknown at 6:10 pm

You say "The real reason the Government of Canada canceled the symposium was because it heard that serious autism advocates were going to be attending as autism community representatives." Do you have any proof that's the real reason the symposium was postponed, or is this just speculation. Just what the heck can "serious autism advocates" do during a symposium that they can't do as effectively at any time. Isn't it more likely that government found out that they could not throw together a national symposium with only 3 months planning (April to June).

I contacted he CIHR before the first planned symposium was canceled/postponed and asked whether ASNB of which I am a director would be allowed to submit names a request that was declined.

I know that other advocates were trying to obtain invitations as well. With the new symposium I was aware that the NIHR was consulting suggestions from certain quarters in NB. They did NOT ask ASNB the recognized provincial autism body in NB.

Why would they not even consult the provincial autism society in NB when seeking names from NB to invite? They clearly wanted to ensure that anyone attending conformed to a profile consistent with government expectations - docile, compliant.

Couldn't find a big enough room? No, I don't believe that.