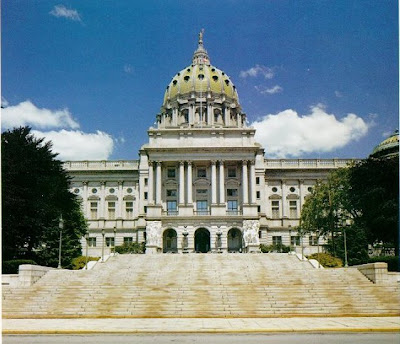 Autism Heroes - the Pennsylvania House of Representatives legislators who passed WITHOUT OPPOSITION a bill to require private and state coverage of autism care.

Associated Press HARRISBURG - Private insurers would have to provide up to $36,000 in coverage annually for autism services under a bill that the Pennsylvania House passed without opposition yesterday.

The measure, sponsored by Speaker Dennis O'Brien (R., Phila.), calls for the state to pay for any treatment costs that exceed that amount.

"By ensuring better coverage of services, and therefore wider availability, this bill can help our outstanding physicians and scientists to solve the autism puzzle," O'Brien said.

The bill goes to the Senate, although a spokesman for Senate Republican Leader Dominic Pileggi of Delaware County said the chamber probably would not take up the measure before the summer recess.

Also without opposition, the House sent to Rendell a bill that would expand the duties that nurse practitioners could perform. They would be able to, among other things, order medical equipment and home-health and hospice care, make therapy and dietitian referrals, issue homebound-schooling certifications, and perform disability assessments for methadone treatment. Such activities would be allowed only under agreement with a physician and if nurse practitioner had a specialty certification.

The bill is another element of the "Prescription for Pennsylvania." The House and Senate are expected to be in session today.