The Face of Autism - Loss of funding spells loss of skills 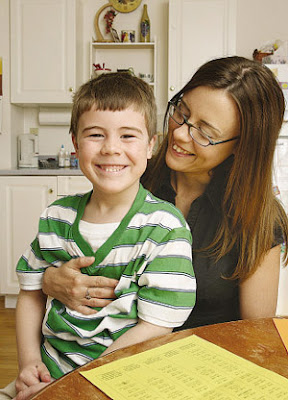 
I have on previous comments applauded New Brunswick Premier Shawn Graham and the Liberal government for its promise to train 100 TA's and Resource Teachers a year at the UNB-CEL Autism Intervention Training program. Some TA's and teachers have already received the training but the commitment made during the election campaign by Mr. Graham is being held up now and, it appears at least, that the commitment is in serious danger of being abandoned or watered down beyond recognition, replaced by in house training by the Department or some other "innovative" alternative. While we remain hopeful that the pledge will be honored we are aware of positioning by the Department of Education officials that would see training of much less quality and integrity than the UNB-CEL program offered by the Department. The attached article from the Daily Gleaner here in Fredericton New Brunswick illustrates the predicament faced by autistic children who have been receiving intervention when the turn five years of age in New Brunswick.


Tying shoes is a simple task for most eight year olds.

But for Austin O'Donnell, it takes a little more practice.

Austin is autistic, and through intervention therapy, he learns many skills that don't come easily to him.

Just tying his shoes was broken down into 25 steps to make the task easier for him to remember.

But without continuing the therapy, his mother Jennifer O'Donnell worries Austin may lose some of the skills he worked so hard to acquire.

The government funds an intervention program for preschool-aged autistic children.

Applied behavioral analysis intervention therapy is the most popular and most successful therapy for autistic children. It's not a cure for autism, but it helps children reach their maximum potential.

But once the child enters kindergarten, the funding stops. But that doesn't mean the intervention should stop too, said O'Donnell.

That means big money for parents who have to hire the intervention workers themselves.

For the last three years, O'Donnell has organized a benefit dance to try to raise enough money to be able to hire an intervention worker to spend time with Austin every week.

"There are no resources," she said. "I'm a single parent. I've worked two jobs and held the benefit dance for the last three years to split the bill financially. And I'm willing to do that.

"If I don't fund raise, he simply won't have it. To me, that's just not an option. I'm hoping at some point that there's going to be a change, where (the government) provides some funding."

Austin was diagnosed with autism when he was four, so he only took advantage of the therapy for eight months before the money stopped.

"I knew the funding would be cut when he entered school," she said. "I knew that in my mind, but it didn't really hit me that there was nothing. And, when it happened, I just thought quickly, how can I raise money to continue this?"

The dance usually helps fund about eight to 10 months of intervention therapy.

Most autistic children have a teacher's assistant in the classroom. But they're not all trained for autism intervention.

Harold Doherty is with the Autism Society of New Brunswick. His 11-year-old son Conor is autistic.

He said it's important that the intervention therapy follows the children into the schools.

One way of doing that, he said, is training the teacher's assistants (TAs) to be qualified to do autism intervention.

"We're pushing to get the TAs trained," he said. "If you're going to have a TA anyway, that you need in most cases, why not train them in some way to be effective to help the children learn?"

There is a course at the University of New Brunswick that trains resource teachers and teacher's assistants in autism intervention.

Doherty said the Liberal government promised that it would train 100 teacher's assistants and resource teachers at UNB per year for four years.

This would help autistic children have a chance to have a trained teacher's assistant.

Yet, Doherty said, there still hasn't been any move on the promise, and the autism society is worried the government is stepping back, or planning on watering down the promise.

But O'Donnell can't wait for the teacher's assistants to be able to take over the intervention work. Austin needs the help now, she said.

"He's beginning to get to an age where he's struggling socially," she said.

"And that's a big deal because if he's having troubles at school in that way, then it's causing a whole other can of worms.


"Not wanting to be at school, and being upset all the time, and not really understanding why he doesn't have friends or why he has such a hard time keeping friends. We've been working on that for the last year."

O'Donnell works with her son on evenings and weekends at home, but she said he needs more intervention time than that.

She said every little bit of therapy can help her son in big ways.

The benefit dance will be held Saturday, April 28, at the Tier II Lounge, above Winners Restaurant on the exhibition grounds at 9 p.m.

Tickets are $20 and can be purchased at Mazzuca's on York Street.

Well I hope you're jolly well going! [to the benefit!]

Anyway, as you said "We're pushing to get the TAs trained," he said. "If you're going to have a TA anyway, that you need in most cases, why not train them in some way to be effective to help the children learn?"....seems so obvious, that I too wonder why this isn't 'standard procedure.' But at the same time, as we all know, the reason goes back to funding again.

I particularly relate to the 'loss of skills' which can be very frustrating for everyone.
Cheers

Why not have the school district hire TAs directly from the home based team?