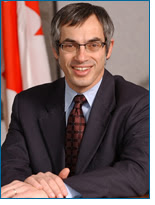 The Honorable Tony Clement Canadian Health Minister has lost his composure and lashed out at FEAT-BC because of its plans to hold him accountable for his inaction in addressing Canada's autism crisis. Mr. Clement expressed his outrage that the FEAT organization would actually organize to bring about his electoral defeat. Mr. Clement accused the FEAT group of being extremists for wanting to amend the Canada Health Act to ensure funding for autism treatment across Canada. Apparently the Liberal and NDP MP's who voted for that precise measure are also extremists in Mr. Clement's narrow view. In expressing his outrage Mr. Clement also declared that he is "the hardest-working minister autism advocates have ever had". How Tony Clement has the audacity to make such a clearly nonsense claims is beyond me. After defeating the motion which would have provided universal coverage for autism treatment in Canada Mr. Clement's government provided ZERO dollars, $0, for autism in its recent budget. Mr. Clement works very hard at doing what he is told by Stephen Harper but there is no evidence that he has so much as lifted a finger to help the cause of autistic children and adults.

The hardest-working minister autism advocates have ever had? That claim is a stinker if ever there was one Mr. Clement.