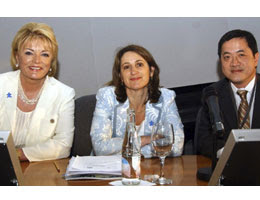 Suzanne Wright and Autism Speaks are raising autism awareness around the globe. The information presented in the following article is basic and to the point. Autism is not a literary metaphor or a different cultural viewpoint, it is a neurological disorder characterized by a range of very serious deficits. Children with autism can be aided immensely by behavioral interventions. But parents and professionals have to understand this point and act promptly and decisively. Autism awareness, not misleading rhetoric, is critical to helping autistic children whatever their country of residence.

Staff Reporter
AUTISM strikes without any discrimination of ethnicity, class, geography, gender or race, said Autism Speaks’ founder, Suzanne Wright, yesterday during the Second Annual International Forum on Children with Special Needs in the Shafallah Center.
Also speaking on the occasion were Ad Council’s executive vice president and director of client services, Priscilla Natkins and Autism Speaks’s chief science officer, Andy Shih.
Referring to autism as ‘an urgent global health crisis,’ Wright said that this fast growing, serious developmental disorder, has become an epidemic which is found in one of every 166 children in the United States.
“Though the causes are unknown, it can spread worldwide without any discrimination,” she explained.
The session, on the urgency of bringing Autism epidemic awareness through public service advertising, began by screening a documentary entitiled, ‘Autism everyday’.
The daily lives of eight autistic children were screened, along with their parents’ apprehensions. The children, all above three to four years, required constant attention and were seen restless.
The main symptom was ‘stimming’, a repetitive body movement that self-stimulates one or more senses in a regulated manner, some of them, being grinding teeth, jumping on toes, head banging and scratching. The child makes absolutely no eye contact and many of them stopped speaking after a particular age. Simple tasks like dressing, brushing and eating by themselves took hours and a mother agreed to this, saying, “it took me two years to teach my son to put his shirt on”.
There have been instances when a child affected by autism had not slept for two to three weeks.
Researches say that 80% of the time, parents with an autistic child end in a divorce, as they are equally helpless and cannot cope with the emotional, and financial issues.
Some of the measures taken for the care of children diagnosed with autism, are behaviour therapy, music therapy, physiotherapy and speech therapy, most of which are done at home.
The parents were apprehensive, as these treatments were expensive - as high as $100 per hour.
Suzanne Wright, who herself has an autistic grandson, Criston, said that grandparents also play an extraordinary role in the care of autistic children. She exhorted that they should provide support to their children to raise the diagnosed child.
Wright said that autism can be diagnosed when children do not exactly meet their milestones, or meet them at an unusually early time, such as sitting up before six months and walking before 10 months.
Wright said that raising awareness was the corner stone of her mission.
Priscilla Natkins spoke about the role of media and and the effective public service campaigns that were raised. Some of the advertisements screened urged the audience to know more about autism, through their website.
The campaigns launched have successfully increased parental knowledge. It was said that the earlier the awareness, the earlier intervention will help. The advertisement council relied on pro bono services from advertising agencies and the media.
The target audience was parents of newborn, and the secondary target being doctors and health care professionals.
Andy Shih, spoke about the research they in this field. He also talked about the importance of scientists all over the world linking and working together to find a cure for this neurological disorder.