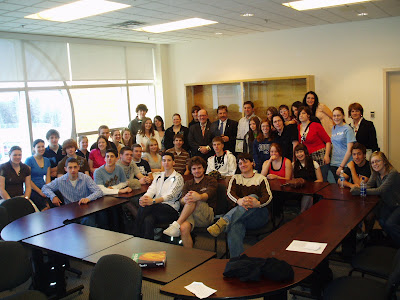 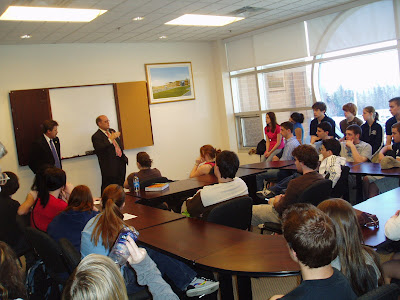 Andy Scott, M.P. for Fredericton (LIB) and Peter Stoffer, M.P. for
Sackville-Eastern Shore (NDP) had a one hour question and answer
session with Leo Hayes students April 25, 2007. They discussed the adoption of
Private Member's Motion M-172 , the Harper Government's failure to
provide funding for a National Autism Strategy in the recent budget and the
need for students to continue lobbying the Conservatives to make the necessary
investments to improve the lives of hundreds of Canadian children and
their families.

The federal MP's expressed their sincere thanks to Grade 12 political
science teacher Greg Peters and his students from 2006-07 for their
work in developing the Private Members Motion and following it through the
entire process when it was voted on in the House of Commons.

The Atlantic MP's encouraged the students, as they move on in their
lives,to remain active in pressing the government to make the necessary
investments. They suggested the students can develop a petition that
can be presented in Parliament, write Letters to the Editor in newspapers,
phone in to radio and television talk-shows, and more importantly contact
Members of Parliament registering their disappointment with
government's decision not to include it in the federal budget and
underscore that they are voters and will be watching closely for
dedicated funding for a National Autism Strategy in the next budget.
Posted by Unknown at 6:06 pm

Email ThisBlogThis!Share to TwitterShare to FacebookShare to Pinterest
Labels: shdopkpd