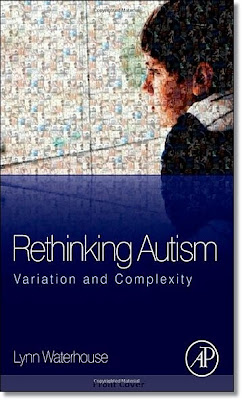 The above Tweet by Dr. Lynn Waterhouse, author of Rethinking Autism: Variation and Complexity,  who also worked with Dr. Lorna Wing on the APA DSM-III-R diagnostic criteria for autism,  should be read by any existing DSM5 committee members charged with developing modifications to DSM-5 diagnostic criteria. The DSM-5 has doubled down on the failed approach of simplifying autism contrary to solid evidence and research.

Dr  Waterhouse's tweet comment on the study Function and Regulation of AUTS2, a Gene Implicated in Autism and Human Evolution suggests to this humble father of a son who suffers from  severe Autistic Disorder (DSM-IV), profound Intellectual Disability and epileptic seizures, including two recent Grand Mal seizures, suggests as does her thorough, well researched Rethinking Autism text that the DSM-5 is taking autism disorders down the wrong path, a path that will cause serious harm to autistic children and adults and to the research necessary to develop successful evidence based interventions for autism symptoms and disorders.
Posted by Unknown at 7:54 am

In my case,I had two out of three.I think you could even throw in hearing or visual impairment.Born blind in left eye here.

I had no problems with language delay,but I had serious problems with motor delay.This usually points to a mitochondrial or metabolic element.One of the first things I found when I started to unravel all this "autism" stuff,now about five years ago,was
very high methylmalonic acid,from the folate stuff.Presumably I had had this all of my life,and never treated it,and I most likely have mito too.Organic acidemias are one of the big causes of motor delays,as is mitochondrial disease.

I say "seizures" rather than "epilepsy",because metabolic seizures,like I have,are considered seizures but not epilepsy.

Even though,I have been treating my CFD,since 2009,and have been seizure free since,I learned yesterday,it's always there.I was coming back from the grocery store,when I felt very sick,unable to walk,and blacked out.The next thing I know,I am in an ambulance,unable to walk or talk.I know what it was a CFD related seizure,and a bad one.I was told I collapsed into a busy street,and some kind soul called 911 and picked me up.

It took at least four hours before I was able to hobble and crawl out to the bust stop.All I had on my mind was to get home and take a high dose of leucovorin.That night,I still had some pain,but the worst was over.It was one of the worst seizures I had ever had.Who knows what that leucovorin has saved me from getting since I started it in 2009.

All I think of is what I have seen from ASAN about how one of their goals is to make it so you can be diagnosed with autism,with even fewer things than there is now.

I never posted on these blogs but I'm getting kind of desperate for help with my girl. I found your blog through kim oakley. I have a youtube account of my girl. Haven't posted videos in awhile though. My girl is 28. She has autism, cognitive disability, some SIB(big head punching and banger) her biting can be severe until she bleeds but mostly just nibbling on her skin, severe sensory problems, and some rare conditions such as kindlers where she has to avoid the sun cuz it can be deadly and then a moderate-severe cold allergy called cold utercaria and daily seizures. She has other disabilities too but those are the main.

I read about your son with seizures and saw this post by Roger. We still haven't figured out what's going on with her seizures. She had 2 grand mals in the past two weeks not to mention it seems like every hour she has petit mals, myclocnic activity and of course drop seizures. We've had eegs but she can't keep the electrodes on cuz she tries to rip them off and punch her head in. Soi never know if they can get good results. Had a MRI 2 years ago with nothing showing except a 2 years before that they found a tumor on her petitutary gland and said nothing to worry about. She's had genetic testing done and blood work, everything. She seems to have a mild autoimmune disorder that they say nothing to worry about. She's on a gluten casein free diet well past week she just randomly stopped eating and she has this condition where her acid will eat her stomach faster then normal people so we let her just find anything to eat so she doesn't end up on a feeding tube but she's on enzymes to help her digest. Although never confirmed taking gluten or casien is beneficial for her but were desperate for relief. She also has daily organic vegan shake with extra greens. Takes tumirac and vitamin d daily with magnesium at night and in the morning.

We're hopefully taking her to a new place designed for autism and epilepsy but we just spent a lot of money on genetic testing and dentist bills cuz she has to be sedated to do anything cuz she bites. Also we were affected by sandy but I just want relief for her. She's regressing and unable to do much of anything. She has two new 1:1s who don't know what to do with her cuz the amount of seizures she has.

I just have a couple questions. What did you do to get your son properly diagnosed with epilepsy,did he need to be sedated to have the electrodes? Did you see a specialist in epilepsy or both epilepsy and autism? We see a epitlogist and he said might be to far deep in her brain to find out what's causing her seizures but this is ridiculous cuz each day I feel like I'm watching her disappear. I also would like to know more about metabolic conditions and seizures. How you, roger, got diagnosed and then became free of seizures. We already tried b supplements and that did nothing and I can't count how many medications she's been on for seizures either. Just looking for some help. Thanks.