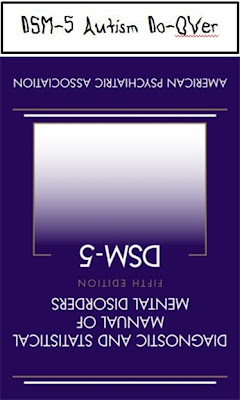 Catherine Lord, and her highly influential views about autism and intellectual disability seem to have changed a bit since the 2003 article published below and the DSM-5 Autism Do-Over which will be published in 2013.  For those who quibble over the reference to 2013 as being "now" they should know that Dr. Lord and the DSM-5 subcommittee have no intention of changing any of the wording of the DSM-5 Autism Do-Over which will take effect in 2013. For the intellectually disabled  the future is now, they are no longer part of the autism spectrum.
As Dr. Lord has already confessed, the DSM-5 committee of which she is a member has already targeted the intellectually disabled for exclusion  from the DSM-5's New Autism Spectrum Disorder. That confession is also confirmed by the exclusion language in mandatory criterion A of the DSM-5 which excludes an autism diagnosis where the social communication deficits are accounted for by general developmental delay. The writing is on the DSM-5's purple wall.
If there is any change at all in the wording of the DSM-5 Autism Do-Over it will be at the higher functioning end and will favor inclusion of more persons who are least affected by an "autism" disorder.  Persons with high functioning autism and Aspergers have powerful allies in the major mainstream media institutions; allies like Amy Harmon of the New York Times.  For the MSM and Hollywood autism is Aspergers.
The intellectually disabled who comprise the vast majority of those with DSM-IV Autistic Disorder are never mentioned in those highly influential circles and the recent firestorm over exclusion from the DSM-5. The uproar is over the possible exclusion of the highest functioning persons with an ASD, persons who can work in rock bands, run successful businesses, graduate from university, cavort with New York media and New Jersey and Washington political figures and committees.
Dr. Catherine Lord and her DSM-5 committee will continue with their plans to separate intellectual disability completely from the autism spectrum as though there were no connection between the two.  But Dr. Lord did not always see the intellectually disabled as a lower caste to be excluded from the autism spectrum rooming house as illustrated in this 2003 journal article abstract:
Evidence for Latent Classes of IQ in Young Children With Autism Spectrum Disorder


Autism is currently viewed as a spectrum condition that includes strikingly different severity levels; IQ is consistently described as one of the primary aspects of the heterogeneity in autism. To investigate the possibility of more than one distinct subtype of autism based on IQ, both latent class analysis and taxometrics methods were used to classify Mullen IQs in a sample of 456 children with autism spectrum disorder. We found evidence for multiple IQ-based subgroups using both methods. Groups differed in level of intellectual functioning and patterns of verbal versus nonverbal ability. Results support the notion of distinct subtypes of autism that differ in severity of intellectual ability, patterns of cognitive strengths and weaknesses, and severity of autism symptoms.


In 2003 Dr. Catherine Lord (and Dr. Geraldine Dawson of Autism Speaks) saw the intellectual ability patterns as a significant basis for distinguishing subtypes of autism that differ in severity.  Apparently her views have changed ... dramatically ... since then.  To the great detriment of the vast majority of those with Autistic Disorder and intellectual disabilities.
Posted by Unknown at 2:11 pm

Hi Harold, long time no comment. Is there anything wrong with a researcher changing there opinion as time goes by. As Tom Jones sang "It's not unusual" nothing that is ever written is set in stone and can't be revised (Well apart from the ten commandments that is)

What I find interesting from a sociological perspective sitting on the sidelines of this DSM V debate is how everybody feels threatened at either "end" of the "spectrum" you have the "super aspies" fretting that they will not be "impaired" enough, and now we have you fearing that intellectual disability will no longer be in. Sounds to me if I were to believe everybody that autism is being abolished altogether. To be honest I am not worried, I'm not a US citizen, and neither are you and Conor, there is still ICD 10 for the rest of the world. (except France that is who are still in the dark ages)

Wow, what a load of hypocricy. Thanks for sharing this Harold!

What people don't understand is America often leads the change in thinking. I am confident, however, that this will all backfire on Ms. Lord and her sub-intellectual, pernicious cronies. This is all about money and corruption in key places. The autism diagnosis has been compromised. The phony autism advocates who are threatened by people like my son are not autistic. If they were, they wouldn't work so hard to create, as you say, a caste system within autism. Only the work of a devious and self-serving mind would dare to think this way. This is not the mind of a true autistic person. Autistic people aren't mean and nasty individuals. They aren't wearing masks of sanity. It's even funnier to watch the professionals sit with some guy named Ari Neeman, as if he's speaking for autism. He is speaking for a philosophical ideology that fuels lucrative autism industry. There is a shameful cover ups, frauds and deception in the American autism community. And the ones who can't speak for themselves, the people with actual autism, not the new revised version, are looked at as collateral damage. But like I said, it will backfire. They may gain ground now, but God is always on the side of the oppressed. It may not look like He is, but he's watching and He will bring these compromised, money loving bigshot experts to shame. Meanwhile, we need to keep exposing them and rip off their masks of sanity. Parents of autistic children and adults have been through enough. This is a major insult and con job to the vast majority in autism spectrum. I honestly dont' think people understand what's going on. Follow the money. Where's the lies and injustices, there is always a love of money. In Catherine's Lord's case, it seems to be love of other people's money, as in the tax payers of USA. I see her and other names involved in this revision are on receiving end of millions of dollars worth of dubious autism research grants. How very sad for them. What terrible Karma. I'd have more respect for all of them if they just admitted they were burned out and don't want to deal with moderate to severe autism anymore.

AspieMum, thank you for sharing your personal story on this web site.

Excluding anyone with global developmental delay from receiving a co-morbid autism diagnosis will remove large numbers from the autism spectrum and will make life easier for US insurers, Neurodiversity advocates and some researchers and clinicians. It will not help those with Autism AND Intellectual Disability.

My son with Autism is high functioning (he just didn't co-operate with that bit of the testing so its not in his diagnosis). Comparing the two I can see that if someone has Autism their social skills troubles would not simply be delayed and I would imagine that even if they were also delayed due to a co-morbid developmental Delay those Autistic features would still be there.

Also in addition to the social skills what about the rest of the triad of impairments?

Some people reckon you can't have Aspergers Syndrome and ADHD either, again because of overlap, but my other son has been assessed for both and the professionals have agreed his does indeed have both. He has symptoms that cannot be explained by ADHD but his hyperactivity and lack of focus are such they are in no doubt he has ADHD- in fact he was diagnosed with that first. Just because their is a lot of overlap does not mean yo can't have both. For my son he needs the Ritalin that he can only get by being diagnosed with ADHD but he also needs Autistic Spectrum Disorder type support at school. Without both diagnoses he would not get the appropriate support. The insurance issue isn't a problem here as I am in the UK.