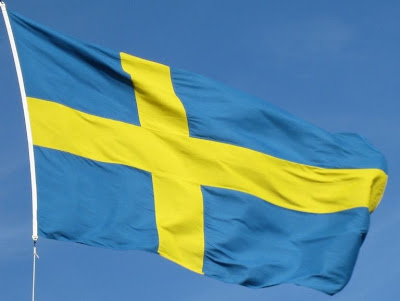 Swedish Flag by Matti Mattila
A major Swedish study offers uncomfortable news to the DSM-5 team trying to pretend there is no relationship between autism and the intellectual disability which affects the vast majority of those with classic Autistic Disorder. It will also be disconcerting  to those who devoutly believe that autism is 100% genetic. The study finds that children born of immigrants to Sweden had an increased risk of developing autism with intellectual disability. The study authors also conclude that autism is governed by environmental as well as genetic factors:
A major register study from the Swedish medical university Karolinska Institutet shows that children born to certain groups of immigrants in Sweden had an increased risk of developing autism with intellectual disability. The study includes all children in Stockholm County from 2001 to 2007, and brings the question of the heredity of autism to the fore.
"This is an intriguing discovery, in which we can see strong links between a certain kind of autism and the time of the mother's immigration to Sweden," says principal investigator Cecilia Magnusson, Associate Professor of epidemiology at Karolinska Institutet. "The study is important, as it shows that autism isn't governed only by genetic causes but by environmental factors too."
The study, which is published in the scientific periodical The British Journal of Psychiatry shows that children of immigrant parents, particularly from countries of low human development, are disproportionately likely to develop autism with intellectual disability, a connection that appears to be related to the timing of migration rather than complications in childbirth. Children, whose mothers migrated just before or during pregnancy, ran the highest risk of all.
"At this juncture we can but speculate about the causes, but our assumption is that environmental factors impacting on the developing fetus, such as stress, new dietary habits or infections, could lead to the development of autism with intellectual disability," says Dr Magnusson.
Posted by Unknown at 6:53 pm

How very sad. This seems to echo some autism research I've read, where minorities are classified as having more severe forms of autism. That said, don't be surprised with your exposing what's going on in Sweden to inspire those with a hidden agenda to make sure more minorities with autism they consider to be easier to research, and generate more autism funding, to be written by journalists who support, or are mislead by experts that severely-autistic should be considered sub-human part of spectrum.

I have read that children of Somali immigrants to Sweden have such high rate of autism that parents have dubbed it "Swedish disease". Because the mothers are dark-skinned and often veiled, scientists suspect some connection to deficient sunlight exposure, but so far have no idea what exactly.