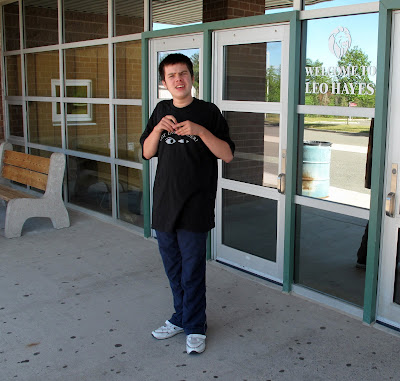 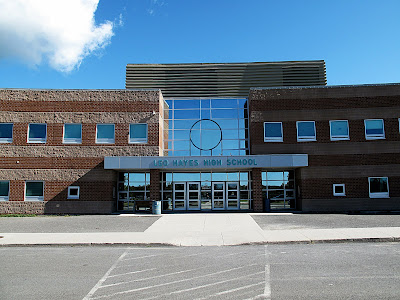 My son does not receive what many would consider an inclusive education. Those who subscribe to the philosophy that all children benefit from learning in a mainstream classroom  would be horrified to learn that my son receives his individualized, ABA based instruction outside the classroom in individual environments in the local high school.  He also begins and ends his day and spends time in a resource center with other children with challenges and interacts with other students to the best of his limited abilities in the common areas.
When Conor began school he started in the mainstream classroom and came home each day with bite marks on his hands and wrists.  That self injurious behavior declined substantially and has been almost non existent in the years between then and his first year in high school last year. For Conor the individualized learning area working with an autism trained education assistant and interacting with other students in the resource center and in other common areas of the school represent real, evidence based inclusion.  This is the inclusion that works for my son and the evidence is crystal clear.
It would be nice if the ideologues who insist that all children must be educated in the mainstream classroom would break free of their ideological chains and look at the evidence. Some children require individualized learning environments for all or part of their day.  When learning is provided based on what works best for the child that is real inclusive education.
Summer is tough for Conor.  He looks forward to going back to school, to Leo Hayes High School, and talks about school on a frequent basis.  One of the things we do to provide encouragement is to just ask him each day "how many days until school".  Conor provides the answer and in doing so feels better by knowing he will be going back sooner with each passing day.  Today Conor's answer was "40 days until school". I am sure he felt better than yesterday when the answer was 41.  Conor loves school, he loves a real, evidence based learning experience.
To paraphrase one of autistic children's greatest friends, Dr. O. Ivar Lovaas, Conor is being taught in the way he can learn and part of the proof is in his eagerness to get back to school.  The way Conor learns is in an evidence based inclusive education that accommodates his learning needs and autism based challenges.
Posted by Unknown at 11:13 am

We're in a 10:3 room. We are in a low behavioural, verbal, multiple exceptionalities room, Gr 1 to 6 and going into Gr 5. I pulled him out after Gr 3 and a mess that should never have happened since the school lied in the end about his placement in June. My son too loves school and is not taught via ABA methods.

His teacher pushes communication and socialization. She still does the 3R's, science and social studies. It's not a perfect fit (there is no such thing) but we'll never find another classroom like it. He, under her teaching (normal - work time, then play time - no mixing, not ABA -giving a toy for 30 secs, taking it away, rote trials, then giving it back if you get compliance from the child - b/c we don't want regression... he hasn't forgotten)

The Teacher is coming tomorrow to see Russ and the ACS SLP. She is very excited to add technology to his communication skills. Our next stage is verbal (or tech use) of full sentences and wh questions. It will be a long one but we're all on side.

Which is why instead of demanding full pay of ABA, I demand full pay of "appropriate for that child" learning. I have in all my lobbying never recommended banning ABA, but in giving funds to parents to use for those services they and their families require. Since what is appropriate in my home.... may not be in yours.

Stateside, here in NY, "least restrictive environment" is the goal. General Ed placement is the first consideration, working up to residential school placement. This must be tailored to the student, and responsive to the student's needs. BTW, my guy learned that SIB is a useful tool from a classmate... and has used it quite effectively as an Authority Modification Technique ever since.

My daughter will be in a self contained autism (low/non-verbal, high behaviours) classroom this fall. I have a bit of a love-hate relationship with this class because, although it does meet her behavioural needs/communication challenges, the focus is mostly life skills. Life skills are good but communication/functional academics are really our focus at this stage (her life skills are fairly decent). We home-schooled before this, with good success, using a combination of ABA strategies (not as farmwife2 paints it), natural environment teaching, art based activities(which she loves), direct instruction (for functional acedemics), visual schedules,life skills, play based learning and any thing else that grabbed her attention. It was exhausting but clearly successful. I don't expect her progress to be as fast in the new classroom (as it was 1:1 at home) but it's WAY better than an inclusive setting would be. In the self-contained room they have the structure, flexibility and staff that just arn't there in a 'mainstream class'. Mainstreaming just doesn't work for everyone- including some 'neuro-typicals'.

Farmwife2- I'm sorry your opinions/experiences with ABA are so negative but I don't share your dogmatic view. I don't believe ABA is the "end all, be all" but there are some aspects to the philosophy that are just good sense (ex: breaking a big task into small steps, encouraging appropriate behaviour, generalizing learned skills... do these things seem dumb to you?) Most people use some level of "ABA" everyday and just don't know it... do you ever treat yourself to a cup of coffee for a hard mornings work?